THE PALACE OF ILLUSIONS, a foundational myth in Bharati society 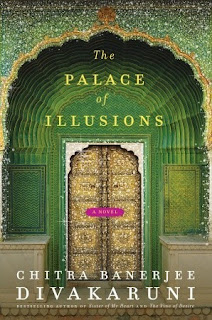 The Publisher Says: A reimagining of the world-famous Indian epic, the Mahabharat—told from the point of view of an amazing woman.

Relevant to today’s war-torn world, The Palace of Illusions takes us back to a time that is half history, half myth, and wholly magical. Narrated by Panchaali, the wife of the legendary Pandavas brothers in the Mahabharat, the novel gives us a new interpretation of this ancient tale.

The novel traces the princess Panchaali's life, beginning with her birth in fire and following her spirited balancing act as a woman with five husbands who have been cheated out of their father’s kingdom. Panchaali is swept into their quest to reclaim their birthright, remaining at their side through years of exile and a terrible civil war involving all the important kings of India. Meanwhile, we never lose sight of her strategic duels with her mother-in-law, her complicated friendship with the enigmatic Krishna, or her secret attraction to the mysterious man who is her husbands' most dangerous enemy. Panchaali is a fiery female redefining for us a world of warriors, gods, and the ever-manipulating hands of fate.

My Review: I'd give it six stars if I could.

Peak reading experiences come all too seldom in life. I think one knows it's a peak when it's almost too painful to endure that the book is ending, but almost too painful to endure to put it down and turn out the light. Then the book comes to you in your dreams, the characters and the situations work their magical way into your receptive dream-mind, and make not only waking hours painfully happy with the reading or anticipation of reading but the sleeping hours more vivid and more real and more alive than ever.

That's what happened to me as I read The Palace of Illusions. I've dreamed of its characters, I've lived vicariously its plot and its many eventful twists for a month of nights, and I truly can't express to you how much pleasure it's given me to do so. I wish for everyone that experience, if not with this book then with another, and soon. It makes a whole new level of appreciation come, or come back, to you when you come across one of these books.

I have had the life-changing experience twice before, and I still treasure those memories. I will treasure this one equally. I suppose the idea of the book, retelling a classic Indian foundational myth called Mahabharat from the point-of-view of a female character, is in keeping with today's popular trend of reimagining myths from all angles and stances. I certainly am aware that telling any Indian myth from a female point of view is a departure from the cultural norms of that society, and to be applauded for that reason alone; but what Divakaruni wrought in doing this is nothing short of creating a new foundation myth on the stones of the old one.

I think a woman who has five husbands wished on her as she comes into this world from a fiery column is worth hearing more about; so did Divakaruni; and thus the tale told here. The myth mentions her, but there is much room for more development. A little like Eve's untold story in Christian myth, and the odd absence of Hera stories as separate from Zeus and his philandering. Extraordinary men need extraordinary women, and simply not telling me-the-reader about them doesn't make them not exist; it merely hides them in deep and scary shadows until a woman with the right eyes comes along, sees the real story, and sets about telling it.

We are all of us readers the richer for Divakaruni's gift of this book to us. I do not, however, recommend it to all readers; I don't think its power is in its broad appeal but in its complete appeal. I suspect that some whose reading preferences are more aimed at comfort and at the satisfactions of reinforcement and reassurance would find this an unpleasant book to read. But I truly wish for each of you that you give it a try, let it at least make a start on working its beautiful enchantment on you. I hope it will be able to speak its way into your dreams the way it did mine.
Posted by Richard at 6:30 AM