SUPERZELDA, an early canary in the Zelda resurgence mines 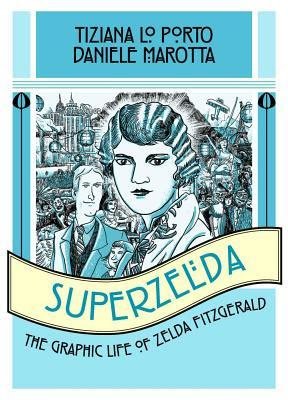 The Publisher Says: Dancer, painter, writer, muse, passionate lover, and freethinker, Zelda Fitzgerald is one of the most iconic figures of the Jazz Age. Born in Alabama in 1900, she was only 18 when she met F. Scott Fitzgerald, an ambitious young writer who would turn into one the greatest American authors of all time. Beautiful, talented, irreverent, extravagant, and alcohol-driven, the newly married couple took New York's high society and the whole literary world by storm. They traveled to France, Italy, and Africa; hung out with Ernest Hemingway, Dorothy Parker, and Gertrude Stein; managed to both charm and enrage most of the people they were acquainted with; and ended up destroying their love and themselves-Zelda was diagnosed with schizophrenia and spent more than a decade in psychiatric clinics, tragically dying at 48 in a fire. Superzelda is a thoroughly researched work based on period photographs and documents, as well as on Zelda and Scott's writing. It is a biography, a love story, and a travelogue all wrapped into one. The beautiful two-color illustrations bring to life one of the most fascinating women, as well as eras, of the early 20th century.

No, for real. I saw a tweet of a reviewlet for Superzelda and, well, I was too curious not to look into the book itself. Baz Luhrmann's adaptation of The Great Gatsby, the publication of Z, and now this! An embarrassment of riches in Fitzgeraldry. What can a comic book add to the merriment, I wondered, that something more meaty and textual couldn't do better?

Well now, given my overall lack of appreciation for comic books, the answer you're expecting now is either a grumbling "not a lot" or a shrieking "NOTHING!" Nanny nanny boo-boo! I liked this comic book condensed history of Zelda Sayre Fitzgerald a good deal.

The illos are, well, they're what I'd expect. I think they're okay. The fact that they're printed on comic-book paper, uncoated and not very thick and pretty rough, added to the charm of the thing. It even smells the way I expect a comic book to smell! I like the two-color printing, black and various screens of a lovely slate-meets-turquoise blue. I like the choices of subjects to illustrate and the sense I get that Marotta, the illustrator, had about six zillion photos tacked up and piled on tables and propped against books in his studio and he alchemically schlurgled them around in his visual cortex and blew them out his hands in a fury of creation.

LoPorto's writing I can't comment on, because of necessity it's been translated and that means I have no idea how this compares to her original since I haven't read all of it. The story is already familiar to me, so I'm not reading to be informed, only entertained. I was, at least enough to finish the book.

Which leads me to the heart of the matter for me: What is the point of these things? They're not violent or prurient, previously the two reasons that comic books existed; they're not in-depth, they're not glitteringly witty or lushly lovely; they're sort of limbic creations, in a twilight zone of fact meeting imagination that just makes no sense to me. This is a book that resembles Zelda, Nancy Milford's excellent biography of Zelda Fitzgerald, the way Wikipedia resembles the Encyclopedia Britannica. Did I enjoy it? Yeah, in a browsing-the-porn-sites way; nothing much not to like, but nothing to get my teeth (!) into.