AGNES MARTIN, overlooked for pop-fame but not for artistic recognition of her genius 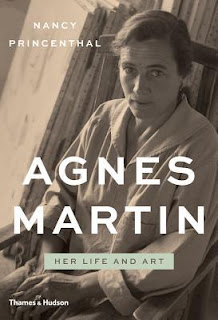 The Publisher Says: Over the course of a career that spanned fifty years, Agnes Martin s austere, serene work anticipated and helped to define Minimalism, even as she battled psychological crises and carved out a solitary existence in the American Southwest. Martin identified with the Abstract Expressionists but her commitment to linear geometry caused her to be associated in turn with Minimalist, feminist, and even outsider artists. She moved through some of the liveliest art communities of her time while maintaining a legendary reserve. I paint with my back to the world, she says both at the beginning and at the conclusion of a documentary filmed when she was in her late eighties. When she died at ninety-two, in Taos, New Mexico, it is said she had not read a newspaper in half a century. No substantial critical monograph exists on this acclaimed artist the recipient of two career retrospectives as well as the National Medal of the Arts who was championed by critics as diverse in their approaches as Lucy Lippard, Lawrence Alloway, and Rosalind Krauss. Furthermore, no attempt has been made to describe her extraordinary life. The whole engrossing story, told here for the first time, Agnes Martin is essential reading for anyone interested in abstract art or the history of women artists in America."

THIS SPECTACULARLY LOVELY BOOK WAS PROVIDED BY THAMES AND HUDSON AT MY REQUEST. I AM DEEPLY GRATEFUL TO YOU.

My Review: Agnes Martin's life began in complexity, proceeded in complexity, and ended in complexity. She wasn't from a happy family, evidence suggesting her father's existence added little to her mother's happiness or material success; his life appears to have diverged from his family's before Agnes could possibly have known anything of him, as early as 1914 (she was born in 1912) when her mother assumed ownership of the Saskatchewan land where he brought them to homestead. The famously close-mouthed Martin spent most of her youth on Canada's West Coast, not the Saskatchewan prairie; yet it was that prairie, vast and limitless vistas defined by the unique quality of unmodulated light, that ever and always lived in her eye.

Author Princenthal's unenviable task in biographizing Martin was set early on, in that closed-mouthedness and its close relative "is this real or is it Memorex?" Can the few recorded utterances of a quiet, and often quietly under the heavy burden of mental illness...symptoms recorded by friends suggest schizophrenia dogged Martin's life, undiagnosed and gratefully not severe enough to cause outside intervention...be rationalized into a single narrative, or is it even important and relevant to make this attempt?

I myownself say no to that. I think what survives in the way of others' memories of Martin and her life and her utterances are best read, viewed, absorbed as simply as possible, representative of Martin's preferred presentation of self. Let us leave the private and inner world of the artists to the artist, accept what she said at a given moment as her truth, and recognize that her truth evolved with her spirit and her magnificent, mathematical, ultimately and beautifully spiritual artwork.


Martin's retrospective evaluation of the artwork she made during her initial years in New Mexico was categorical: "At Taos I wasn't satisfied with my paintings and at the end of every year I'd have a big fire and burn them all." ... The ouevre begins modestly, with several small watercolor landscapes strongly reminiscent of John Marin; they could be among those of which she said, "I used to paint mountains here in New Mexico and I thought my mountains looked like anthills." This is not necessarily a failure of representation. The clarity of the atmosphere in New Mexico (see above for reference to unmodulated light) does make distant mountains look deceptively close, hence oddly small, and Martin's depictions are sprightly and fresh, capturing the regal blue sky and hurrying clouds so characteristic of the high desert. 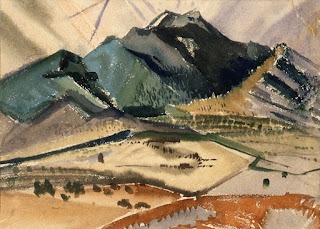 This 1947 image of Taos' mountainous amazing landscape is a rare survivor of Martin's tendency to destroy her works, a female Cronus (Crone-a? heh), when they weren't up to her demanding standards. Princenthal on this specific piece:

This is precisely how the image hits my eyes and the words could have come from my own brain; this is the moment when I began to trust Author Princenthal to lead me, not simply to inform me of facts, but lead my eyes to moments and places I would have gone to had I the erudition and the visual vocabulary to know of them. In reading a book about an artist, this sense is (for me) irreplaceable; it is akin to the feeling I get when, as a recent and deep disappointment with Edward Hoagland's latest novel demonstrated on the downside, an editor and/or author demonstrates a solid and deep grasp of detail.

Martin's early and unsatisfactory landscapes, journeyman works no doubt but fine ones indeed, gave way in her middle age...she was forty in 1952...to the Abstract Expressionist-ish work of her second round of schooling at Teachers College of Columbia University in New York. The heady art atmosphere of 1950s New York could not possibly have passed Martin by, though Author Princenthal makes plain the comparatively more conservative art culture of the college. I suppose that's inevitable in an academic setting where preparing a person for a career in art instruction is the purpose. This image is, in my eyes, one of the most Agnes Martin-ly images she produced in that time, superior in its emotional affect on me to several more derivative Abstract Expressionist canvases: 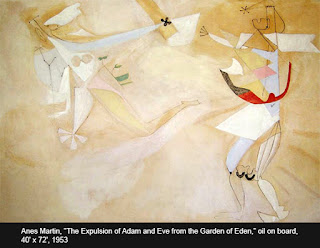 Martin spent much of her life...well into her 50s...either in poverty or damned close to it. Not so very unusual for an artist, I suppose, but I can't help but feel when I look at this huge 48" x 72" work that the cost to her for the materials must have been ruinous; and to my eye, the painting itself should have sold for Jackson Pollock money. Princenthal has this to say about the work:


More robustly narrative, Expulsion of Adam and Eve from the Garden of Eden, tentatively dated 1953, is, at 4 by 6 feet, a very large painting by Martin's standards at the time.... It is executed in oil on board, and in feeling is decidedly graphic, with delicate contours, executed in finely drawn, ink-black lines, and vaporous washes of color. The biblical narrative is given a sharp twist into what clearly seems, not the exodus of two mortals fallen from a state of grace, but the escape of a terrified woman from a powerful if irresolute man. Adam's head, outlined in profile, faces up, howling; a star shoots across the sky above him. Though reaching forward, he seems immobilized, perhaps by the horseshoe-like shapes that link his slightly bent knees. His upright form spans the surface, an anchoring column. Eve, by contrast, is in chaotic flight. Facing us, her arms wide in appeal, she is lifted up by a graceful, bounding leg, and also by a spinning, propeller-shaped foot; she appears as well to be supported by wings. Windswept green leaves adorn her back. The colors, thinly applied, are mostly pale shades of pink, blue, and white, though a bright red form scythes across Adam's midsection; flying toward his chest is what seems to be a disembodied breast. For all the inscrutability of its symbolism, the composition is powerfully integrated; its emotional register is of baffled panic, as in a dream from which the sleeper desperately tries, without success, to scream herself awake.

This 1958 work is unusual and deeply interesting to me. Martin's creation of it is structural as well as painterly. It fits my idea of Martin as an artist of space and time. The author has this insight to offer:


Without question she would come to resist, in the most vigorous terms, any suggestion that her work represented landscape, water, weather, light, or any other natural conditions or forms. But the natural allusions in titles persist for some time...what is arguably clearest, in these works of the late 1950s and early '60s, is the difficulty of giving up such references to landscape and water, of turning away from the kind of natural beauty to which she was so clearly alive, and which offered so much in the way of painterly, and emotional, resources. ...Martin was experimenting with reliefs and fully three-dimensional constructions made from materials found around the [New York] seaport. The Laws, 1958...consists of a tall, narrow wooden board (it is 93-1/2 by 18 by 2 inches) that is painted grey below and black on top; a gridded pattern of boat spikes is driven into the black field. ... "The life of the work depends upon the observer," [Martin] wrote. And, "if we can know our response, see in ourselves what we have received from a work, that is the way to the understanding of truth and all beauty."

So for all Martin's strenuous rejection of Nature as Muse, Martin the artist knew and said in words that the viewer perceives the work and derives from it the meaning and beauty that she can, and will. So while the intent was not to re-create the world on canvas or board, the perception of the viewer inarguably takes precedence over the intent of the artist. Constructions like The Laws can be seen as attempts to reject Nature but end up, at least to this viewer, evoking the very seaside that provided their materials. I don't think Martin was done with the natural world.

Martin's many years in New Mexico were a wildly mixed bag, monetarily speaking; her art never stopped its endless refining process. Sometimes it's only in deprivation that a spiritual seeker can find a way to speak her truth. Martin's explicit rejection of Nature as her muse will always ring hollow to me. She herself said, "Almost everyone believes that art is from the of the artist meaning the intellectually grasped experience. ... I want to repeat: there are no valid thoughts about art. If your sensibilities are awake you will respond." 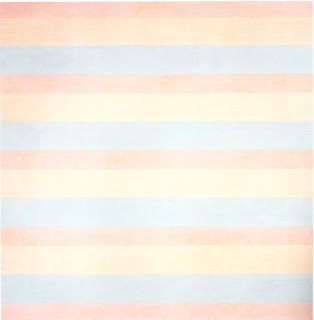 This 1992 untitled image presents the Agnes Martin I suspect most people are familiar with. Her color planes and smooth geometry and gorgeously realized symmetry create a calm mood, a lot like looking at a Taos springtime landscape or a visit to a sunrise seashore. Agnes Martin's limitless vistas and perfectly tuned spaces, colors, shapes, and ideas are timeless...literally outside of time. Her art, in that sense, truly does reject nature as a muse. It's impossible to paint a landscape or a still life that is outside of time. Light forbids it.


The way Martin lived, the way she dressed and ate, socialized ans spent her private time, the way she furnished her homes and traveled, conformed to no one's notions of high style. She didn't wear black, she wasn't svelte or soignée. While she never owned a television (or a computer), neither did she live off the grid...She loved fancy cars and ocean liners. She liked being honored. She valued humility above all else. She was at once a consummate insider and a lifelong outsider, a devoted student of Zen and Christian mysticism, ans a sworn skeptic. She was of sound mind (and to the extent that such a state can be defined), and at times she was not. Her most reliable testimony remains her majestic work.