ONE WRITER'S BEGINNINGS, an oral memoir/lecture by a major Southern literary light 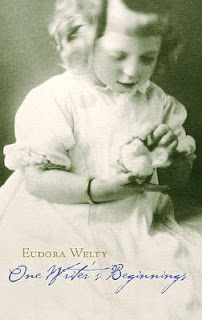 The Publisher Says: Eudora Welty was born in 1909 in Jackson, Mississippi. In a "continuous thread of revelation" she sketches her autobiography and tells us how her family and her surroundings contributed to the shaping not only of her personality but of her writing. Homely and commonplace sights, sounds, and objects resonate with the emotions of recollection: the striking clocks, the Victrola, her orphaned father's coverless little book saved since boyhood, the tall mountains of the West Virginia back country that become a metaphor for her mother's sturdy independence, Eudora's earliest box camera that suspended a moment forever and taught her that every feeling awaits a gesture. She has recreated this vanished world with the same subtlety and insight that mark her fiction.

Even if Eudora Welty were not a major writer, her description of growing up in the South--of the interplay between black and white, between town and countryside, between dedicated schoolteachers and the public they taught--would he notable. That she is a splendid writer of fiction gives her own experience a family likeness to others in the generation of young Southerners that produced a literary renaissance. Until publication of this book, she had discouraged biographical investigations. It undoubtedly was not easy for this shy and reticent lady to undertake her own literary biography, to relive her own memories (painful as well as pleasant), to go through letters and photographs of her parents and grandparents. But we are in her debt, for the distillation of experience she offers us is a rare pleasure for her admirers, a treat to everyone who loves good writing and anyone who is interested in the seeds of creativity.

My Review: The unassuming, delight-filled, unsparingly un-self-indulgent prose of Miss Eudora's fiction is surpassed in this expansion and revision of her Massey Lecture in the History of American Civilization, delivered at Harvard in 1983. For anyone unacquainted with Miss Eudora's literary output, I recommend starting with short fiction ("The Bride of the Innisfallen" is a good starter, followed by "Why I Live at the P.O."), moving on to her chef d'ouevre, the novel The Ponder Heart; this memoir, all 104pp of it, should come after one knows whether one is able to appreciate the particularities and glories of Miss Eudora's work. While I think she would appeal to any able-minded reader, I know from experience that her beautiful sentences sound like preciosity to some readers: eg, "Over a stronghold of a face, the blue hat of the lady in the raincoat was settled on like an Indian bonnet, or, rather, like an old hat, which it was." (from "The Bride of the Innisfallen")

This, to me, is equaled in English by Nabokov's terse clarity, and by little else; but it has been cited to me several times as unendurably cutesy or simply overwritten. I so completely disagree that it's hard to credit the opinion-havers with a shred of taste; however, there are tastes, and there are tastes, so I move on from my digression.

One Writer's Beginnings is told in a narrative voice much like her fiction; it is constructed like the linear tale that a life is when it is reflected on at leisure; and there are so many things in her history, from 1909 and her birth until her last entry in the lecture, a trip by train to New York during the Great Depression as a WPA junior publicity agent, that clearly formed a consciousness of time and place and rightness of things that she uses to such telling effect in her stories. An anecdote early in the book of her parents' morning routine of whistling and humming back and forth up and down the stairs phrases from "The Merry Widow Waltz" illuminates for me the means by which this shy, never-married lady "got" the signals of relationship that are so necessary to the parties in happiness. Another moment, the discovery of two nickels preserved in a hidden box, teaches me that Miss Eudora never felt any unmixed emotion (I won't tell that story, it must be read to be understood) and that is why The Ponder Heart is such a landmark in Southern ficiton.

The death of Miss Eudora's beloved father in 1931 is simply too painful for her to go into; she elides the details and leaves us to infer her pain. It fits with her lifelong lack of interest in talking about herself, but it leaves the reader without an anchor in what had to be a turbulent passage in her life. I can't fault the lady for her reticence, but in this as in several other areas, it would have behooved Miss Eudora to have let others guide her in preparing these talks so as to answer more questions:


It is our inward journey that leads us through time – forward or back, seldom in a straight line, most often spiraling. Each of us is moving, changing, with respect to others. As we discover, we remember; remembering, we discover; and most intensely do we experience this when our separate journeys converge. Our living experience at those meeting points is one of the charged dramatic fields of fiction.

Well, and therein the rub: It was the last thing she ever wanted to do, answer questions, and it's also why she wrote such marvelous stories, to answer them all unasked:


Long before I wrote stories, I listened for stories. Listening for them is something more acute than listening to them. I suppose it’s an early form of participation in what goes on. Listening children know stories are there. When their elders sit and begin, children are just waiting and hoping for one to come out, like a mouse from its hole.

Miss Eudora Welty, thank you for all of it, and a safe journey into the future for your gifts to us who follow along behind you.
Posted by Richard at 6:30 AM