JOAN MITCHELL: LADY PAINTER, though painter she was lady she most assuredly was not 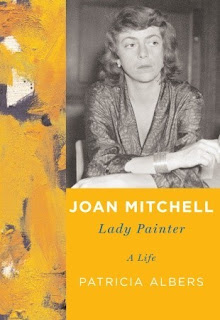 The Pubisher Says: “Gee, Joan, if only you were French and male and dead.” —New York art dealer to Joan Mitchell, the 1950s

She was a steel heiress from the Midwest—Chicago and Lake Forest (her grandfather built Chicago’s bridges and worked for Andrew Carnegie). She was a daughter of the American Revolution—Anglo-Saxon, Republican, Episcopalian.

She was tough, disciplined, courageous, dazzling, and went up against the masculine art world at its most entrenched, made her way in it, and disproved their notion that women couldn’t paint.

Joan Mitchell is the first full-scale biography of the abstract expressionist painter who came of age in the 1950s, ’60s, and ’70s; a portrait of an outrageous artist and her struggling artist world, painters making their way in the second part of America’s twentieth century.

As a young girl she was a champion figure skater, and though she lacked balance and coordination, accomplished one athletic triumph after another, until giving up competitive skating to become a painter.

Mitchell saw people and things in color; color and emotion were the same to her. She said, “I use the past to make my pic[tures] and I want all of it and even you and me in candlelight on the train and every ‘lover’ I’ve ever had—every friend—nothing closed out. It’s all part of me and I want to confront it and sleep with it—the dreams—and paint it.”

Her work had an unerring sense of formal rectitude, daring, and discipline, as well as delicacy, grace, and awkwardness.

Mitchell exuded a young, smoky, tough glamour and was thought of as “sexy as hell.”

Albers writes about how Mitchell married her girlhood pal, Barnet Rosset, Jr.—scion of a financier who was head of Chicago’s Metropolitan Trust and partner of Jimmy Roosevelt. Rosset went on to buy Grove Press in 1951, at Mitchell’s urging, and to publish Henry Miller, Samuel Beckett, Jean Genet, Jack Kerouac, Allen Ginsberg, et al., making Grove into the great avant-garde publishing house of its time.

Mitchell’s inner life embraced a world beyond her own craft, especially literature . . . her compositions were informed by imagined landscapes or feelings about places.

In Joan Mitchell, Patricia Albers brilliantly reconstructs the painter’s large and impassioned life: her growing prominence as an artist; her marriage and affairs; her friendships with poets and painters; her extraordinary work.

Joan Mitchell re-creates the times, the people, and her worlds from the 1920s through the 1990s and brings it all spectacularly to life.

My Review: This is a life, not a biography, in the sense that it offers more of a rounded picture of Joan Mitchell than a rigorous analysis of her milieu and her position and her place in history. Mitchell, a hard-drinking, hard-loving, hard broad, is famous if you know who she is, and invisible if you don't. I suspect that would make her really, really mad. Mitchell was a daughter of privilege, wealthy dermatologist father and novelist/poet/editor (Marion Sobel Mitchell) mother, who felt unloved and grew into a figure-skating champ, then an early Abstract Expressionist/Action painter, then the wife of serial monogamist/avant garde publisher Barney Rosset (an old friend of ours), whose life-work running Grove Press was all due to Joan telling him about her friend's failing little publishing company, and finally ending her days as an expatriated eminence grise of feminist art in America. How she hated that! The expatriating part she loved, living in a small French village where Monet had honed his Impressionist chops; the feminist part? Loathed it from the depths of her gin-soaked soul. She felt no kinship with Woman. She felt no unmixed feeling, frankly, on any subject. She was a difficult, dangerous friend and a worse enemy. She was deeply disagreeable, arguing to no great purpose about anything with anyone, and seldom offering any kind of apology for the havoc she caused in the lives and worlds of those around her.

She died of cancer at sixty-seven, after drinking, smoking, and boinking enough for three dozen misspent youths. Barney was sincerely distraught. I suspect he never got over her. He talked about her quite a lot...the other four wives, not so much, unless there was some child or grandchild related reason to do so. I don't imagine anyone else had an unmixed response.

Her work was...it remains...well...go here to see Field for Skyes, which she painted to release the grief of losing her beloved Skye terrier Bertie. It's an IMMENSE piece of art, but even in the inkydinky Internet form, it's lovely. In person, Mitchell paintings are all about paint...the effects of different techniques of putting paint onto a painting are crucially important to the visual experience of the painting. In photos, that's simply not possible to reproduce. But enough survives to give you a chance to experience Mitchell's passion. Like it or don't, and I don't much, Mitchell's work is strong and intense and accomplished. What it isn't, and what I suspect she knew it wasn't, is great. Field for Skyes, Hirshhorn Museum of the Smithsonian Institution

Books about art are, unless they're big and all in color and lushly produced, like safe sex: enough of the real thing survives that you're inclined to continue, but it ain't like the real damn thing, and no amount of skill or wishing or forcing yourself to believe is gonna make it so.

Patricia Albers does a decent job conveying the chaos and the bleakness of Mitchell's life. She does a lot less well at giving any hint as to why the woman didn't kill herself in existential crisis...does ANYthing make Mitchell happy? I couldn't say...but the inevitable moment when Albers must speak to us, her readers, about paintings she cannot show us in a 400+-page mostly text book, points up this book's major failing. Here, from p249, is Albers describing Mitchell's painting Ladybug, painted per Albers very shortly after the death of Mitchell's beloved singer Billie Holiday in 1959:
"Luscious garden hues -- cadmium red, celadon, cobalt blue, ultramarine, slurry brown, carmine, ochre, acid raspberry -- splash and streak through this luminous nine-foot-wide oil. Some colors optically blend. Others pop from the picture plane, thanks in part to the painter's astute use of red-green and blue-ochre polarities. (The latter, along with Ladybug's architectural exactitude and play of colors against aerating whites, evoke the late work of Cezanne.) Mitchell's gloriously variegated brushstrokes push and tug and shimmer and float, like the edges of planes jostling in a shallow space or foliage lifted and twirled by a breeze, kissing the light, then heaving away." (There's more, but I'm tired of typing this stuff.)

This is Ladybug, on view at the Museum of Modern Art: 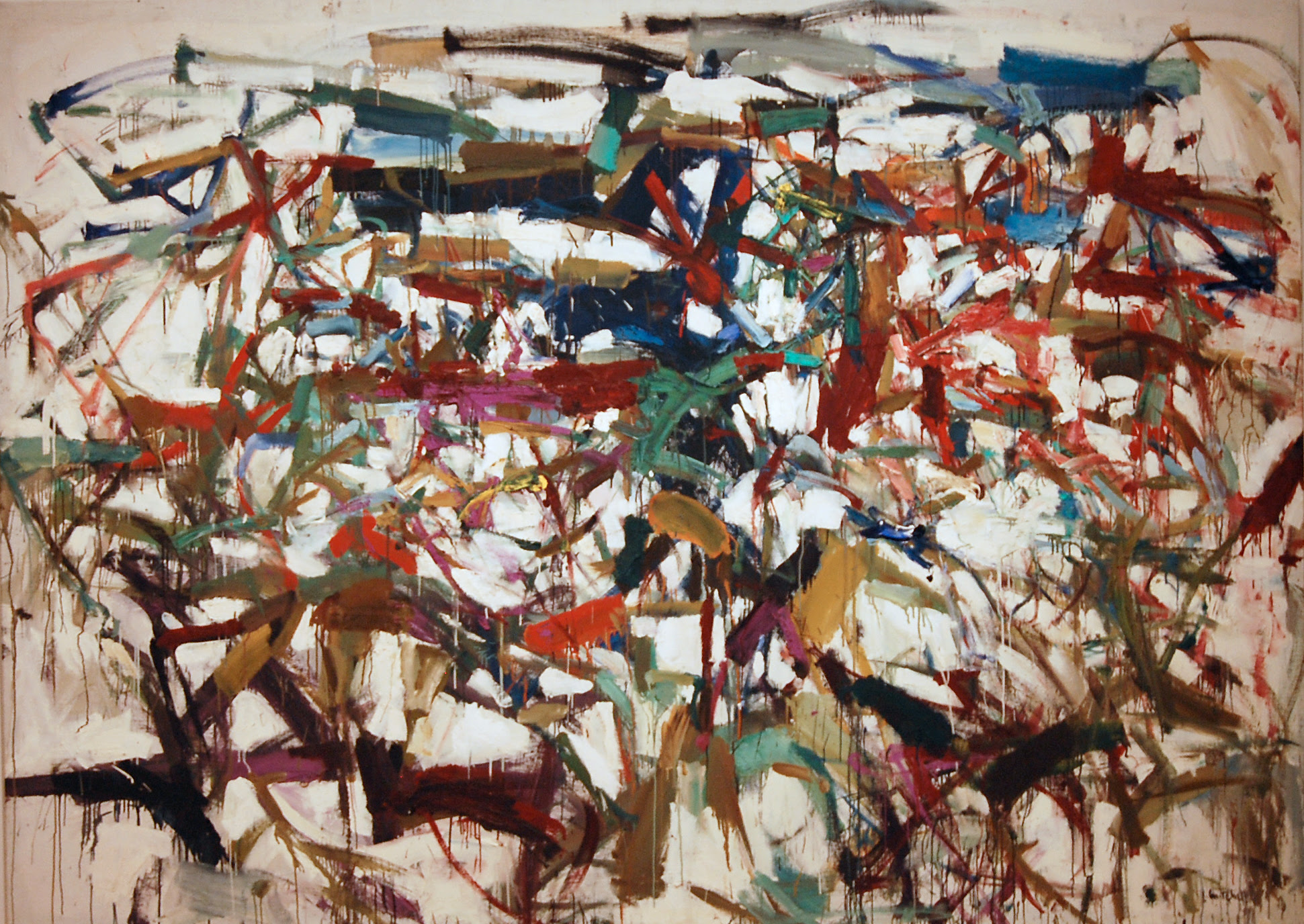 I've seen the painting with my own two baby greens and, to be frank, I would not picture anything like that painting from those words. And lest it be said that everyone's experience of art is subjective, I counter that I've seen a LOT of art and even a lot of Mitchells...I, an experienced and sophisticated viewer, should be able to recognize a painting I've actually seen from this kind of description.

So...would I recommend the book to you? No, not unless you're an art aficionado possessed of a strong and broad visual vocabulary. It wouldn't hurt to read the stuff about the world of the 1950s New York School of Abstract Expressionists in here, but that's frankly not enough to make it worth your while to pick the book up. Dare if you must. But keep Google Images open and use it freely and frequently if you're braving these waters without your own mental map. Shoals abound for the innocent and the unwary.

But for the initiate, this grimoire of grimness illuminates (how ironic) some dingy corners of an important passage in American and world art. In the end, I'm glad I read it, but I suspect many would not share my interest.
Posted by Richard at 6:30 AM