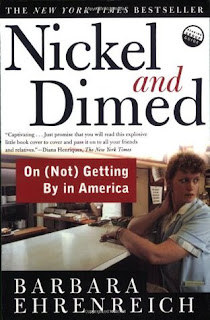 NICKEL AND DIMED: On (Not) Getting By in America
BARBARA EHRENREICH
Picador USA
$16 trade paper, available now

The Publisher Says: Millions of Americans work for poverty-level wages, and one day Barbara Ehrenreich decided to join them. She was inspired in part by the rhetoric surrounding welfare reform, which promised that any job equals a better life. But how can anyone survive, let alone prosper, on $6 to $7 an hour? To find out, Ehrenreich moved from Florida to Maine to Minnesota, taking the cheapest lodgings available and accepting work as a waitress, hotel maid, house cleaner, nursing-home aide, and Wal-Mart salesperson. She soon discovered that even the "lowliest" occupations require exhausting mental and physical efforts. And one job is not enough; you need at least two if you intend to live indoors.

Nickel and Dimed reveals low-wage America in all its tenacity, anxiety, and surprising generosity -- a land of Big Boxes, fast food, and a thousand desperate strategies for survival. Instantly acclaimed for its insight, humor, and passion, this book is changing the way America perceives its working poor.

My Review: Let's get something out of the way right here and now: Ehrenreich has had a lot of snarky feedback about the fact that, in researching and writing this book, she's "playacting" and her privileged background as a PhD-having writer shows in every "condescending" moment of expressing surprise at how ground down her temporary colleagues are. She is the target of "ghetto tourism" accusations. And so on and so forth. I suppose for the stupider members of the audience the concept "investigative journalism" isn't familiar. She, a journalist, stepped out of her own life to investigate an important situation in American society. So we're clear: Her responses are part of the story. They are MEANT TO BE PART OF THE STORY, YA DIMWITS. Her privilege is showing because she's privileged and she's doing these crap jobs to see what it's like. Guess what? IT SUCKS. So she responds as anyone from her background would.

Not to mention her ancestors weren't middle class, they were the very people she's reporting on...with the important difference that their labor was rewarded adequately to support their families. How things change when the bidness bastards get their greedy mitts on the levers of power:


My aim here was much more straightforward and objective — just to see whether I could match income to expenses, as the truly poor attempt to do every day. Besides, I've had enough unchosen encounters with poverty in my lifetime to know it's not a place you would want to visit for touristic purposes; it just smells too much like fear.

I guess that passage whipped past the haters. Or they just decided it didn't matter for some arcane reason. Anyway, I consider that specious argument laid to rest. Allons-y!

As a nouveau poor person, I can tell you I've never come close to breaking even on any transaction of any sort. The reason:


There are no secret economies that nourish the poor; on the contrary, there are a host of special costs. If you can’t put up the two months’ rent you need to secure an apartment, you end up paying through the nose for a room by the week. If you have only a room, with a hot plate at best, you can’t save by cooking up huge lentil stews that can be frozen for the week ahead. You eat fast food or the hot dogs and Styrofoam cups of soup that can be microwaved in a convenience store.

You get fat when you're poor because the only food you can afford is shitty, processed, and low-quality store-brand offal. No apartment? No fridge. No fresh anything, even assuming you go pay a buck for an apple (do the math when you're in the produce section). No milk, only "creamer" (terrifying stuff, look at the label sometime) for your coffee, tea, cereal. I personally am incredibly lucky because my most recent roommate left me his fridge when he had to go to the nursing home. Imagine! Frozen veggies!! Luxury.

Ehrenreich brings us to the brink of a hideous cesspit of greed with this ongoing slimy, nauseating sludge of reality soup:


As Louis Uchitelle has reported in the New York Times, many employers will offer almost anything—free meals, subsidized transportation, store discounts—rather than raise wages. The reason for this, in the words of one employer, is that such extras “can be shed more easily” than wage increases when changes in the market seem to make them unnecessary. In the same spirit, automobile manufacturers would rather offer their customers cash rebates than reduced prices; the advantage of the rebate is that it seems like a gift and can be withdrawn without explanation.

Salary or wages become expectations, and can't have the hoi polloi expecting a decent living! After all, where will all those scumbag banksters get the extra zero on their bonus checks from if minimum wage is set at a livable level?

So Ehrenreich, an educated woman, has a thunderstruck moment of realization:


To draw for a moment from an entirely different corner of my life, that part of me still attached to the biological sciences, there is ample evidence that animals — rats and monkeys, for example — that are forced into a subordinate status within their social systems adapt their brain chemistry accordingly, becoming "depressed" in humanlike ways. Their behavior is anxious and withdrawn; the level of serotonin (the neurotransmitter boosted by some antidepressants) declines in their brains. And — what is especially relevant here — they avoid fighting even in self-defense ... My guess is that the indignities imposed on so many low-wage workers — the drug tests, the constant surveillance, being "reamed out" by managers — are part of what keeps wages low. If you're made to feel unworthy enough, you may come to think that what you're paid is what you are actually worth.

She realizes that her response is typical of people whose lives are lived at this depth of society. Imagine how someone less able than she is internalizes this hideous reality. To her credit, she thinks about this, even though her genetic privilege of intelligence prevents her from fully experiencing its soul-crushing impact. And it's the bored upper classes who guzzle antidepressants by the fistful. Something's very wrong with that....

Of course, the opiate of the masses is now TV not Jeebus. Even there the poor person is slapped and kicked and punched with the expectation that we're all one big middle-class world:


Maybe it's low-wage work in general that has the effect of making you feel like a pariah. When I watch TV over my dinner at night, I see a world in which almost everyone makes $15 an hour or more, and I'm not just thinking of the anchor folks. The sitcoms and dramas are about fashion designers or schoolteachers or lawyers, so it's easy for a fast-food worker or nurse's aide to conclude that she is an anomaly — the only one, or almost the only one, who hasn't been invited to the party. And in a sense she would be right: the poor have disappeared from the culture at large, from its political rhetoric and intellectual endeavors as well as from its daily entertainment. Even religion seems to have little to say about the plight of the poor, if that tent revival was a fair sample. The moneylenders have finally gotten Jesus out of the temple.

Really, what else needs be said? Can you watch your sitcom or your vampire show the same way after being awakened to the impact that its assumptions have on the maid who polishes your moss-covered three-handled family gradunza, the immigrant smiling as she hands over your greaseburger and fries with a molto grandissimo vat of fizzy death juice (which for gods' sweet sake STOP PUTTING IN YOUR BODY NOW!)?

I think the point of this book is best summed up here:


When someone works for less pay than she can live on — when, for example, she goes hungry so that you can eat more cheaply and conveniently — then she has made a great sacrifice for you, she has made you a gift of some part of her abilities, her health, and her life. The 'working poor,' as they are approvingly termed, are in fact the major philanthropists of our society. They neglect their own children so that the children of others will be cared for; they live in substandard housing so that other homes will be shiny and perfect; they endure privation so that inflation will be low and stock prices high. To be a member of the working poor is to be an anonymous donor, a nameless benefactor, to everyone else.

If this isn't enough to shame you into activism on behalf of the people who mow your, your neighbor's, and the local church's lawn for a lousy $40 or so; bring your lazy ass a pizza in her own car, paying $4 or so for a gallon of gas and insurance and then you tip her $2 or $3; or teaching your snot-nosed privileged peanut-allergied unvaccinated brats while her own kids are a constant worry because the school system doesn't provide daycare, then I have no hope for your soul.
Posted by Richard at 6:30 AM