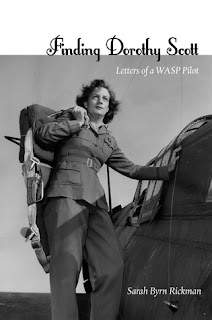 Dorothy Scott was one of the thirty-eight. She died in a mid-air crash at the age of twenty-three.

Born in 1920, Scott was a member of the first group of women selected to fly as ferry pilots for the Army Air Forces. Her story would have been lost had her twin brother not donated her wartime letters home to the WASP Archives. Dorothy's extraordinary voice, as heard through her lively letters, tells of her initial decision to serve, and then of her training and service, first as a part of the WAFS and then the WASP. The letters offer a window into the mind of a young, patriotic, funny, and ambitious young woman who was determined to use her piloting skills to help the US war effort. The letters also offer archival records of the day-to-day barracks life for the first women to fly military aircraft. The WASP received some long overdue recognition in 2010 when they were awarded the Congressional Gold Medal-the highest honor that Congress can bestow on civilians.

THE PUBLISHER PROVIDED A REVIEW COPY AT MY REQUEST. THANK YOU!

My Review: It's amazing the depth and breadth of my ignorance about women's roles in military history. As World War II cranked up, the need for planes to get from where they were built to the place they were needed grew critical. Men had been ferrying the planes for the Army Air Force before open hostilities broke out. Naturally enough, these men were needed as combat pilots after Pearl Harbor was attacked, since they had the proper gentialia to be fighters. That left a vacuum for women to fill, much like wartime exigencies made in so many industries and walks of life.

That much I'd sort of assumed. I had no notion of the roots or the branches of the womens' role in this vital area of military endeavor. We've probably all heard of Amelia Earhart because she died on that round-the-world flight. But the world she came out of, the raw, rough early flying days, had plenty of women piloting these primitive fabric-and-wood crates in air circuses and barnstorming shows and everywhere there was flying to be done. Unsurprisingly, these were the women who filled the ranks of experienced flyers training raw recruits as the Army Air Force lunged to the limits of physics getting planes built, trained in, flown, and all around the town to coin a phrase.

I, to my surprise, was surprised. Logically the use of the women whose aerobatics were skilled from surviving the flying entertainment industry is no leap, but I just didn't know such a thing had existed. So score one for Author Rickman, a dedicated scholar of the WASP and WAFS, in the educate a man column. Score another one for making a couple thousand words bringing the whole readership up to speed so efficiently without missing a chance to entertain us with anecdotes from the era. I was sure, then, from the earliest pages of this book, that I was going to enjoy learning about Dorothy Scott and her world.

She was brought into the world by weird parents; her mother was well past thirty when she married her father, a man slightly her junior who was what we would now call a serial entrepreneur. For the early, World War I, days of their marriage, the Scotts lived on a fishing boat sailing between Alaska and Seattle. G.M. Scott bought the boat to make his fortune. Then sold it because he made his wife pregnant a second time, and the mere idea of two adults, a baby, and a three-year-old on a working boat made me claustrophobic 100 years later. It turned out to be an extra-good idea because the baby was twins, Dorothy and her brother Ed.

The boat morphed into a Ford dealership in rural Washington State. (I'm still chuckling over a man known as "G.M." to all and sundry selling Fords.) The three Scott siblings were shown the value of turning your hand to anything that needs doing; their family survived the Depression well enough for all three to discover a shared love of flying that led all of them to enter the Army Air Force or its equivalent, the WAFS, as soon as WWII started. What failed was the parental Scotts' marriage, as Mrs. Scott left rural Washington to settle in Los Angeles to be near a sister, apparently preferring this to being near a husband who "had a well-recognized temper."

Dorothy Scott was a lovely young woman, as the ample illustrations in the book demonstrate. She was as conventional as her parents: until she was accepted for WAFS training she was a flight instructor after not-quite graduating from college. Her father, concerned for the future of his clearly unusual daughter, had wanted her to enter the business world. That was out when her one, and I get the feeling from what's not said half-hearted, stab at it failed to pan out. Reading this passage from one of Dorothy's letters home to him, I think G.M. probably realized that the best solution to a problem is, sometimes, the least ordinary one:


Then we climbed in BTs [Basic Training planes]...To do it up right, we made a formation take off between smudge pots lining the runways. Remember, it was night! Oh pop, I'll never in all my life forget that ride! There we were nearly touching the next plane and guided only by small lights [on each plane] and the flare of the exhaust.

I was so busy watching the next plane that for a moment I forgot to look around, but soon I did, and the rapidly fading field looked like a million small fires.

We cruised in close formation for quite a ways, then we separated some. All of a sudden—swish, and we were in a snap-roll! I'd tightened my belt but did it even more, and from there to Memphis I had trouble telling when we were right side up and when we weren't. Loops, slow rolls, Immelmans, and everything else kept me plenty on the jump. I've never had such a ride. It was a very clear night but dark so the stars above looked a lot like the small clearing fires below and I had to check the instruments to believe anything.

The young woman penning those lines was never, ever going to be a stewardess or a housewife or a secretary. She was not built for those things, she was built to fly airplanes and be in the sky away from ordinary life.

And so it is, perhaps, for the best that a transition from the exciting and important flying life that Dorothy led until 3 December 1943 was unnecessary. Dorothy died in a terrible, pointless training accident as she was beginning a new flying skill: Pursuit aircraft, the powerful fighter planes that feature so heavily in war movies! How she would have loved that phase of her career. How incredibly poignant that, while she was taking her first steps on that path, an error in a control tower where she knew no one yet cost her, her trainer, and another pilot their lives.

Now, listen carefully: Author Rickman made me care enough about this long-gone lady, that enthusiastic and engaged and excited young woman on her way up in her career and her life, that I sniffled a little when reading about her death. In a biographer, that level of nice and accurate rendering of the subject is a gift. Since this is not the first WASP biography from her, I suppose the author's skills in reanimating this long-gone world and its already collected stakes are in fine fettle from use and experience. But still, this was more than I expected when I saw this title while researching possible Women's History Month review subjects.

I've read other books published by Texas Tech University Press, and have liked each of them. A collection of short fiction largely set in the part of South Texas I'm from; a novel of the Plains Indians; a story of the settling of the part of Central Texas I grew up in. Each one was an excellent reading experience, and I'm very pleased to add FINDING DOROTHY SCOTT to their ranks.
Posted by Richard at 6:30 AM