THE SPRUCE GUM BOX, historical novel about a corner of history little recalled today or outside Maine 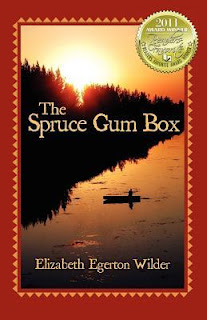 The Publisher Says: Addie loved to run along the river’s edge so the wind could blow through her long hair, released from the strict bun her father demanded. When Jed returned from the lumber harvest in the spring, she would fly into his arms, releasing her pent-up passion from its winter prison. Little did they know their forbidden love would set in motion a series of events that would forever change their lives and make Jed a fugitive.

With a bounty on his head and his infant son hidden beneath his coat, Jed turned to the only man he felt he could trust—the leader of a nearby Micmac settlement. The unlikely partnership that ensued defied all odds, overcoming bigotry, betrayal, and the unforgiving 1820s Maine wilderness, to stake a claim on the primitive New England landscape.

As the strife escalated between Great Britain and the United States over the border of Maine and the rights to its lucrative lumber industry, determination to survive and create a life for his young son drove Jed into uncharted territory and perilous adventure.

My Review: When a man falls in love with a pretty woman in our world, things take their course pretty much without drama most of the time. This makes this moment in history almost unique. The consideration of who the woman's father is, the idea that a woman is off-limits due to her family, is a bad and fading memory in Western culture. Unless you're a royal, of course, but there are very very few of them left.

Mercy me. The idea would have seemed like paradise to Jed, the hero of this tale. He and his "bastard" son are driven away, in a profane rage, by Adelaide Wingate's English father. His only recourse is to put them both at the mercy of the local Indian people, the Micmac. Guess what? The welcome mat is rolled out! Jed and Ben, his son, are made to understand they're family. Addie, by contrast, is sent back to their native England, leaving their lives forever.

Separating a mother from her child is a horrible act of cruelty and violence. To deprive a child of its mother is a lifelong wound inflicted on the spirit of a child. The saving grace is the acceptance and kindness of the native American people, believing as they do in the necessity of life's continuing in as much kindness as is possible.

But the glory of the book is its beautiful evocation of the County...Aroostook's old name in Maine...as it is the subject of boundary disputes between the fledgling US and Canada, as well as the setting for an economic boom of the logging industry in the old-growth forest.

For anyone who would like to read a story of a father and son relationship that is loving, respectful, and characterized by reciprocal loyalty, this is the only book I can think of to recommend to you. That alone makes it worth reading! I'd recommend any historical fiction fan dip in because of the geopolitical goings-on. And sexism gets a battering from every angle in this book. Good stuff, all!
Posted by Richard at 6:30 AM