I AWAIT THE DEVIL'S COMING, turn of the 20th century adolescent feminist memoir 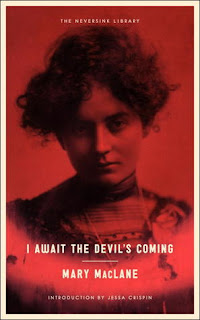 The Publisher Says: Mary MacLane’s I Await the Devil’s Coming is a shocking, brave and intellectually challenging diary of a 19-year-old girl living in Butte, Montana in 1902. Written in potent, raw prose that propelled the author to celebrity upon publication, the book has become almost completely forgotten.

In the early 20th century, MacLane’s name was synonymous with sexuality; she is widely hailed as being one of the earliest American feminist authors, and critics at the time praised her work for its daringly open and confessional style. In its first month of publication, the book sold 100,000 copies — a remarkable number for a debut author, and one that illustrates MacLane’s broad appeal.

Now, with a new foreword written by critic Jessa Crispin, I Await The Devil’s Coming stands poised to renew its reputation as one of America’s earliest and most powerful accounts of feminist thought and creativity.

THE PUBLISHER PROVIDED ME WITH A REVIEW COPY AT MY REQUEST. THANK YOU.

My Review: Adolescent female angst-o-rama...wouldn't get published today...but in 1902? YOWZA. Women weren't, in general, heard from in 1902. Girls weren't even supposed to exist publicly. And here's Mary MacLane talking about her girlish agonies in clear, concise, charming prose!


Ah, adolescence. That moment when maturity bites but perspective fails. Perspective doesn't even exist, there hasn't been time for it to develop, and that's always been the source of trouble for the perspectiveless young adult. Look what happened to Romeo and Juliet! A wiser pair of heads would've figured out the plan without resorting to oh-so-romantic but ever-so-permanent suicide. But Mary, well, she's not about to End It All for Luuuv. She's got her eyes on a different prize:


Surely there must be in a world of manifold beautiful things something among them for me. And always, while I am still young, there is that dim light, the Future. But it is indeed a dim, dim light, and ofttimes there's a treachery in it.

She is, in fact, correct. The future is a treacherous damned beast, as adults well know. I'm actually retroactively impressed that Mary knew this. I suppose she came by the feeling naturally, having experienced the grim horrors of a childhood spent knowing with all your being that you are Other in a world that loathes otherness:


I shall have to miss forever some beautiful, wonderful things because of that wretched, lonely childhood. There will always be a lacking, a wanting -- some dead branches that never grew leaves. It is not deaths and murders and plots and wars that make life tragedy. It is day after day, and year after year, and Nothing. It is a sunburned little hand reached out and Nothing put into it.

I recall this feeling with caustic bitter clarity. Poor thing! Montana *now* is not a place where it's safe or healthy to be Other, but 115 years ago...! The mind reels. The days of slogging through the quagmire to achieve nothing except survival live inside me as they did inside Mary:


It is day after day. It is week after week. It is month after month. It is year after year. It is only time going and going. There is no joy. There is no lightness of heart. It is only the passing of days. I am young and alone.

It's no wonder to me that Mary began to think in terms of The Devil, The Great Adversary. Her Otherness made these thoughts comforting. She looked around her and saw not even oceans...too few people in Montana...but brackish backwaters of unbearable averageness:


An idle brain is the Devil’s workshop, they say. It is an absurdly incongruous statement. If the Devil is at work in a brain it certainly is not idle. And when one considers how brilliant a personage the Devil is, and what very fine work he turns out, it becomes an open question whether he would have the slightest use for most of the idle brains that cumber the earth.

Heh. Yep, I relate, Mary. Awful to look around and see, in Mycroft Holmes's memorable phrase from the TV show Sherlock, "a world of goldfish." Her young heart clung to one thread of hope: ESCAPE!


As I stand among the barren gulches in these days and look away at the slow-awakening hills of Montana, I hear the high, swelling, half tired, half-hopeful song of the world. As I listen I know that there are things, other than the Virtue and the Truth and the Love, that are not for me. There is beyond me, like these, the unbreaking, undying bond of human fellowship—a thing that is earth-old.

Don't know how she saw that at nineteen, but it probably did as much as writing this book to save her from self-harm. Perspective might be lacking, perspicacity most certainly was not! And self-knowledge to a degree that impresses me. Mary clearly knew her own mind and came to her own conclusions about her place in this world:


From insipid sweet wine; from men who wear moustaches; from the sort of people that call legs "limbs"; from bedraggled white petticoats: Kind Devil, deliver me.

From the depths of the 21st century, Mary, an old man salutes you. What a pleasure it was to get to know you just a bit. I expect we'd've been friends.

Be aware, ye modern readers, that Mary's company is like that of any younger person to an oldster. She repeats herself quite without seeing the repetitions. She has stumbled on insights we take for granted. She doesn't get that others have trod the same damn grapes for millennia now, but she's got a great excuse in being a small-town girl from nowhere much. So put your sour face back in the box and read this with a smile for best results.
Posted by Richard at 6:30 AM