MY LIFE IN FRANCE, culinary goddess Julia Child tells enough to keep the pages turning...but not all 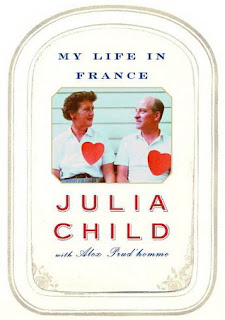 The Publisher Says: Julia Child single handedly awakened America to the pleasures of good cooking with her cookbook Mastering the Art of French Cooking and her television show The French Chef, but as she reveals in this bestselling memoir, she didn't know the first thing about cooking when she landed in France. Indeed, when she first arrived in 1948 with her husband, Paul, she spoke no French and knew nothing about the country itself. But as she dove into French culture, buying food at local markets and taking classes at the Cordon Bleu, her life changed forever. Julia's unforgettable story unfolds with the spirit so key to her success as a cook and teacher and writer, brilliantly capturing one of the most endearing American personalities of the last fifty years.

My Review: Truth in advertising had no greater champion than Julia Child. Her book is called exactly and precisely what it is: The narrative of her life in France. She begins her book on November 3, 1948, with the Child family landing at Le Havre, getting into their gigantic Buick station wagon, and motoring off across northern France towards Paris. They stop at thirty-six-year-old native Californian Mrs. Child's first French restaurant, La Couronne, where her husband Paul (already fluent in French from his first stint living there more than 20 years before) consults with M. Dorin, the maitre d', and decides the young marrieds (relatively speaking, as he's 46 by then) will have a sole meuniere with a glass of wine! I mean! A nice Republican-raised gal from Pasadena, California, drinking wine with lunch! Who heard of this?! Mais certainement not Mme. Child, nee McWilliams!

It was the beginning of a life-long love affair between Julia Child and la belle France, and Julia Child and la cuisine Francaise. It led to several books, several TV series, and a long, happy life spent teaching, teaching, teaching. Mme. Child had found her metier, at close to forty, in a day and time where living past sixty-five was ** considered to be ancient. In the process, the person she became changed the American, and possibly the world as a result, culture surrounding food. Yet Julia Child wrote this book with her husband's great-nephew Alex Prud'homme, who tells us in his brief Foreword that getting his garrulous old relative to open up about the feelings and secrets that make up the majority of any human life. His degree of success was formidable, given the generational and gender-induced reticence he fought against to extract the juicy bits from her.

Julia Child was a fixture around our house when I was young. I got the TV-watching habits I carry with me to this good day at a tender age, and part of the formative process was The French Chef. My mother didn't like Mrs. Child much. She was a fan of M.F.K. Fisher's food work, which wasn't in sympathy with Mrs. Child's careful and precise measuring and nice and accurate timing. Mama was a feast-maker, not a dinner-preparer, and that's why she watched Julia Child programs.

I learned about enthusiastic appreciation of food from my mother and Mrs. Child. I was never a picky eater, and only rejected a few foods. (I still hate corn on the cob.) It always seemed like the ladies were having so much fun making these weird dishes! It made sense to me that it would be fun to eat them, and so it proved to be.

In reading this memoir, I immersed myself in the flow of Child's later-life awakening to the joy of food and the sheer exhilaration of preparing special and delicious and carefully thought-out meals for one's loved ones. While I understand the co-author's challenge in balancing the need to afford the famous personality privacy against the buying public's desire to know the dirt, I can only lament that Prud'homme either didn't or couldn't press Child on the topic of her childlessness. I suspect burying herself in research and in obsessive experimentation was a means of assuaging her sadness at not being a mother. She was, or at least she is painted in this book as being, a very nurturing person, and given the prevailing attitudes of the era, it is unlikely that this absence did not cause her pangs of regret. I would have liked to see some exploration of that, mostly because I think glittering surfaces (which this book limns in loving detail) are even more beautiful when seen with shadows. It's like sterling silver flatware: When dipped into a cleaning bath as opposed to hand-polished, it's true that all the tarnish comes off, but all the character does too, and the pattern is flat and blah for lack of a bit of dark contrast that is left by the more labor-intensive hand polishing method.

The delight of the book was in Child's almost orgasmic recollections of the foods and wines she and her dearly beloved husband Paul Child ate and drank across the years. In the course of learning to cook the haute bourgeoise cuisine that she made famous in her native land, Child came alive to the joys and thrills of sight, smell, and taste in a way that only truly delicious food can cause a person to become. It was the positive counterpoint to her manifold frustrations in collaborative cook-bookery. The travails of preparing the Magnum Opus that is Mastering the Art of French Cooking simply don't do enough to make the author come off the page and join me in my reading chair. I rate books based on this type of measure, this degree of ability to enfold and immerse me in the narrative and the emotional reality of the tale being told. I thoroughly enjoyed this book, but I wasn't swept into it and away to France circa 1950, and that was what I came to the read expecting to happen. In fact, when I saw the film partially based on this book, Julie & Julia, I was completely swept away and eager to read the source material.

In the end, I got more out of watching Meryl Streep enact Julia Child than I did reading Julia Child reporting herself. I was disappointed.

And hungry.
Posted by Richard at 6:30 AM