HOWARDS END IS ON THE LANDING, Susan Hill's life in the literary trenches 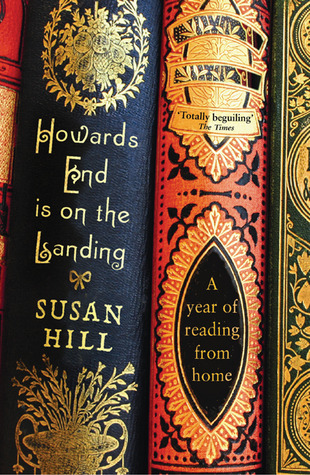 HOWARDS END IS ON THE LANDING: A Year of Reading from Home
SUSAN HILL
Profile Books
$15.95 trade paper, available now

The Publisher Says: Early one autumn afternoon in pursuit of an elusive book on her shelves, Susan Hill encountered dozens of others that she had never read, or forgotten she owned, or wanted to read for a second time. The discovery inspired her to embark on a year-long voyage through her books, forsaking new purchases in order to get to know her own collection again.

A book which is left on a shelf for a decade is a dead thing, but it is also a chrysalis, packed with the potential to burst into new life. Wandering through her house that day, Hill's eyes were opened to how much of that life was stored in her home, neglected for years. Howard's End is on the Landing charts the journey of one of the nation's most accomplished authors as she revisits the conversations, libraries and bookshelves of the past that have informed a lifetime of reading and writing.


My Review: Haven't all of us who possess a lot of books done this? “I will not buy a new book until I have read x from my shelves!” Uh huh. “No seriously THIS year I mean it, I'm not buying a book! Not one! No!” Mmm hmmm “Really!! I WILL NOT!” Yes dear.

I have no idea how Ms. Hill fared in her commitment not to buy any new books for a year (I suspect poorly, but I'm a suspicious old bugger, I am). I read this lovely memoir of her her reading life with pleasure, because she told me enough about the books that sparked the memories she shares for me to capture my own memories of the books, or to latch on to her sense of them, their place in her life, and the overall effect is to offer her own context as well as the book's.

I like that idea. I like to read what other readers think about when they're reading or after they've finished or even before they've decided what to read next. (Makes sense, doesn't it, here on this site?) And when that reader has written some very, very popular books, published some very good books, and talked about books on radio, television, and stage, I mean! Go fight those odds. I had to read this book. And then re-read it. I loved the experience of both, and would never ask for those eyeblinks back.

There are two passages I've come to and come back to multiple times. One is from author David Cecil's book Library Looking Glass: A Personal Anthology, a tome and a writer absolutely unknown to my poorly educated little ol' Texan self; while Ms. Hill does a wee bit of Internet bashing at the beginning of this book, I found Mother Internet most helpful in digging up a potted biography on Wikipedia of this fourth child of a marquess and father of an actor, an historian, and a literary agent. He was a very old-school gent, and deeply deeply steeped in a bygone literary tradition, author of books on Tennyson and Max Beerbohm and Dorothy Osborne...ye gods how grisly it all sounds to my ear. But then Hill quotes this from his 1975 “Personal Anthology:”

It is often said that mankind needs a faith if the world is to be improved. In fact, unless the faith is vigilantly and regularly checked by a sense of man's fallibility, it is likely to make the world worse. From Torquemada to Robespierre and Hitler the men who have made mankind suffer the most have been inspired to do so have been inspired to do so by a strong faith; so strong that it led them to think their crimes were acts of virtue necessary to help them achieve their aim, which was to build some sort of an ideal kingdom on earth.

Oh yes indeed, Lord David. Oh yes indeed, and so well said. Hardly a surprise, I suppose, this gift he shows there with the gab, given the amount and the quality of the poetry he spent his life reading, analyzing, delving into, parsing, disassembling and reassembling and explicating to generations of young scholars. But how surprising, how very satisfying to find, in a book about someone else's readerly DNA, a hitherto uncatalogued strand of my own.

Hill meditates on the subject of what forms a person, on readerly DNA, later in the book. The passage is one I found calling out to me while I was reading other books, and I marked it for easy access. It has helped me understand the reasons that I read, and the reasons that I decide not to read, certain books or genres or authors.

Books help to form us. If you cut me open, will you find volume after volume, page after page, the contents of every one I have ever read, somehow transmuted and transformed into me? … But if the books I have read have helped to form me, then probably nobody else who ever lived has read exactly the same books, all the same books and only the same books, as me. So just as my genes and the soul within me make me uniquely me, so I am the unique sum of the books I have read. I am my literary DNA.

It is the reason I am so interested in what others who, like me, crave the written story and the printed book, have to say about their reading, and their lives. We're all made of a unique set of genes, and a unique formula of books. It makes us deeply flawed, and deeply interesting.

Even as I turned the pages of the book again and sometimes two or three times, to re-read and re-savor some lovely or lively moment of memory or of sensory pleasure, even as I contemplated my own version of this book, I was aware of a sense of want, a lack of something I was expecting and not getting. It feels churlish to bring it up, but it's the reason I've given the book a half-star less than I would have otherwise. Please forgive the nosy American, Ms. Hill, but...so? And you are...? I'm asking for a wee little bit more of your CV, your activities in some...not a great deal, just some...more detail than you give. The small bits of personal information that are here are those that a very congenial acquaintance would provide, and I have the sense that is exactly and precisely what was intended to be offered.

But we're all readers here, ma'am. We're all in the club. A tell-all dishfest on le monde litteraire? No, not this book (though one of those would be lovely)...but a few more lines of whys and hows and whos would not have come amiss, nor would a sense of your place in life as the discoveries you limn for us have weighed down the narrative unduly.

A minor cavil. A delight of a book. My warmest personal thanks from England's 1644 colonial foundation on Long Island to the Long Barn.
Posted by Richard at 6:30 AM