HOW TO GET FILTHY RICH IN RISING ASIA, entrepreneurship's dark side 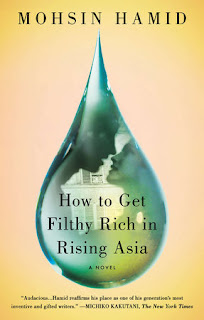 The Publisher Says: His first two novels established Mohsin Hamid as a radically inventive storyteller with his finger on the world’s pulse. How to Get Filthy Rich in Rising Asia meets that reputation and exceeds it. The astonishing and riveting tale of a man’s journey from impoverished rural boy to corporate tycoon, it steals its shape from the business self-help books devoured by ambitious youths all over “rising Asia.” It follows its nameless hero to the sprawling metropolis where he begins to amass an empire built on that most fluid, and increasingly scarce, of goods: water. Yet his heart remains set on something else: on the pretty girl whose star rises along with his, their paths crossing and recrossing, a lifelong affair sparked and snuffed and sparked again by the forces that careen their fates along.

How to Get Filthy Rich in Rising Asia is a striking slice of contemporary life at a time of crushing upheaval. Romantic without being sentimental, political without being didactic, and spiritual without being religious, it brings an unflinching gaze to the violence and hope it depicts. And it creates two unforgettable characters who find moments of transcendent intimacy in the midst of shattering change.

THE PUBLISHER PROVIDED ME WITH A REVIEW COPY OF THIS BOOK AT MY REQUEST. THANKS!

My Review: An internationally flavored mash-up of Death of a Salesman and The Man in the Grey Flannel Suit.

I liked both of those stories, and this one too. I got tired of the second-person gag way early, and it took most of a month to read the book because of that.

What I most appreciated about the book was Hamid's gift for the pithy aperçu:


We are all refugees from our childhoods.

Readers don’t work for writers. They work for themselves.

The fruits of labor are delicious, but individually they’re not particularly fattening.

I love this sort of distilled wisdom. I like the way Hamid feeds it to his readers, in logical places, in small bites, in the course of telling the story. He doesn't set his gems in solitaires but parures. It makes for a richer reading experience this way.

Reading is a subject of interest in this book, the characters read and discuss reading-the-act as well as what they have read. The point of reading is a major revelation within the book:


Writers and readers seek a solution to the problem that time passes, that those who have gone are gone and those who will go, which is to say every one of us, will go. For there was a moment when anything was possible. And there will be a moment when nothing is possible. But in between we can create.

But when you read a book, what you see are black squiggles on pulped wood or, increasingly, dark pixels on a pale screen. To transform these icons into characters and events, you must imagine. And when you imagine, you create.

It is exactly this that makes reading, moreso than watching, such a dangerous and subversive act, one that threatens tyrants throughout history. It is also exactly this that powers anti-intellectualism throughout history: The ability to decode and derive layers of meaning from a text is hugely threatening to people who aren't educationally or intellectually prepared for it. They can't see what you see...therefore YOU must be wrong and YOU are The Enemy.


But what you do sense, what is unmistakable, is a rising tide of frustration and anger and violence, born partly of the greater familiarity the poor today have with the rich, their faces pressed to that clear window on wealth afforded by ubiquitous television, and partly of the change in mentality that results from an outward shift in the supply curve for firearms.

An unnervingly sharp eye for the realities at ground level makes that a gift, if one is willing to receive it, from Hamid to culturally isolated US readers. He isn't likely to be around when you use the gift he's given you. Novelists, after all, are ephemeral culturally speaking. Think I'm wrong? How often does anyone you know speak of Ellen Glasgow or Erskine Caldwell? Influential in their times, they're forgotten and unread by the mass of Americans today. Much as I love reading, the visual media are (bizarrely to me) longer lasting in their impact on the cultural discussion. Many more film directors of similar impact to Caldwell or Glasgow are remembered and discussed today, eg Alfred Hitchcock.

But it's a gift nonetheless:


From the perspective of the world's national security apparatuses you exist in several locations. You appear on property and income-tax registries, on passport and ID card databases. You show up on passenger manifests and telephone logs . . . You are fingertip swirls, facial ratios, dental records, voice patterns, spending trails, e-mail threads.

This is a very stark reality. Everyone leaves a paper trail. Its existence is part of daily life in developed countries and its immense data store includes essentially the entire world. It is an ever-growing monster, The Blob writ large.

Here, though, is the inescapable conclusion that we learn from the data being crunched:


In the history of the evolution of the family, you and the millions of other migrants like you represent an ongoing proliferation of the nuclear. It is an explosive transformation, the supportive, stifling, stabilizing bonds of extended relationships weakening and giving way, leaving in their wake insecurity, anxiety, productivity, and potential.

It is this force that will form the world of tomorrow. It is history being made, reported by storyteller Hamid. It is your future, white America, read it and learn.
Posted by Richard at 4:15 PM