FOLLOW THE RABBIT-PROOF FENCE, Aboriginal Australian girl-children with more grit than most adults 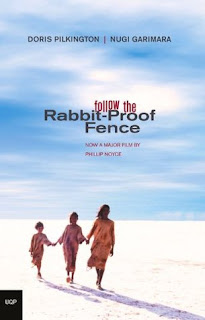 The Publisher Says: This extraordinary story of courage and faith is based on the actual experiences of three girls who fled from the repressive life of Moore River Native Settlement, following along the rabbit-proof fence back to their homelands. Assimilationist policy dictated that these girls be taken from their kin and their homes in order to be made white. Settlement life was unbearable with its chains and padlocks, barred windows, hard cold beds, and horrible food. Solitary confinement was doled out as regular punishment. The girls were not even allowed to speak their language. Of all the journeys made since white people set foot on Australian soil, the journey made by these girls born of Aboriginal mothers and white fathers speaks something to everyone.

My Review: Doris Pilkington's grandfather was a cowardly white man who failed to protect his three half-Aboriginal daughters from the colonial mentality espousing their forced removal from their parents. Their mother left the cad, good on her, and was still powerless to act against the white government to get her daughters out of their "residential school" where they were maltreated. The aim of their removal from Aboriginal society was to prevent them from passing on the values of their society, instead becoming darker-skinned white people. Oh, and not just that, but inferior servant-class white people.

Can't imagine where the Aussies got such a horrible idea. Nope. Just can't. Nor where the South Africans got the idea for apartheid. Nuh-uh. Imponderable. No relation to the American policies on Native peoples or former slaves. Dear me, no.

That sarcasm out of the way, I will remark that the story is presented as a novel despite the fact that Pilkington aka Garimara (1937-2014) was writing about her very own mother's story. It freed her to write about the details of the girls' experiences, ones she must have heard from her mother's own lips, without the burden of fact-checking or documenting things that were never written down or part of any official record in the first event.

The prose isn't stellar. In fact it's pretty clunky. I enjoyed the Aboriginal words used without explanation, since there was a handy-dandy glossary in the back of the book; I didn't want the author to lead me by my lily-white hand to the Promised Land of Otherness. I expect that my rating would've been a lot lower had she done that. I was simply dropped into the otherness, as Molly and her sisters were. It's a good technique, effectively putting the reader into the shoes of scared children.

In the end, the experience of reading the book was better than the book itself. What a weird sentence that is; I know I must sound like a raving loonie. But what I mean by that is that this is a truly important and continually relevant (depressingly) tale of oppression and victimization based on ethnic difference. It just isn't a particularly well-written one. And still it makes a strong impression on the reader, one that means something inside shifts a bit, hopefully in a positive direction. I'd suggest reading it to anyone who thinks the segregation of an ethnic minority is in any way a good idea.

The 2002 film, Rabbit-Proof Fence, is only $2.99 to rent at Amazon. It's got some areas where it's a bit better than the book, and some lovely cinematography. The book and the film are best enjoyed together. How unusual is that!
Posted by Richard at 6:30 AM