THE GLASS CASTLE, a neglected daughter's journey to forgiveness 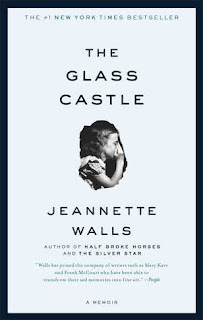 The Publisher Says: The Glass Castle is a remarkable memoir of resilience and redemption, and a revelatory look into a family at once deeply dysfunctional and uniquely vibrant. When sober, Jeannette's brilliant and charismatic father captured his children's imagination, teaching them physics, geology, and how to embrace life fearlessly. But when he drank, he was dishonest and destructive. Her mother was a free spirit who abhorred the idea of domesticity and didn't want the responsibility of raising a family.

The Walls children learned to take care of themselves. They fed, clothed, and protected one another, and eventually found their way to New York. Their parents followed them, choosing to be homeless even as their children prospered.

The Glass Castle is truly astonishing--a memoir permeated by the intense love of a peculiar but loyal family.

There will be a 2017 film whose release date isn't set just yet, so it seemed like a good time to revisit this influential, searingly honest, and personally relevant memoir.

Walls has a non-fiction novel coming out this month, so I decided to re-read the book that started all the ruckus before I got to Half-Broke Horses. (NB I read that book, was disappointed, didn't review it.)

This memoir appealed to me as the youngest child (by a large margin) of two complete nutters. They were not like Walls' parents in that they never let us go hungry and we never lacked a roof over our heads. They were emotionally disturbed, though, and this passage sums up the sensation of being raised by a completely bizarre mother:


I wondered if the fire had been out to get me. I wondered if all fire was related, like Dad said all humans were related, if the fire that had burned me that day while I cooked hot dogs was somehow connected to the fire I had flushed down the toilet and the fire burning at the hotel. I didn't have the answers to those questions, but what I did know was that I lived in a world that at any moment could erupt into fire. It was the sort of knowledge that kept you on your toes.

The fires were, in my house, verbal. As a result of the noisy unsafe minefield I grew up in, I hate to raise my voice. If I have to shout it means (to me) that I've lost, there's no chance of being heard. I'm a sucker, as a consequence, for a man whose emotions are tightly reined in, especially if he's losing his battle against letting them loose. I empathize strongly.

A little backstory: I was romantically involved with a man for some time while I lived in Austin, whom I met on a bus. I got on the bus, sat a few seats behind the cute, sandy-haired, rumpled guy with the prominent ears devouring a book that I spotted from the pay-stile, and sighed the happy sigh of one whose world contains all the things he needs: A job, a home, and all the men he can mentally undress and ravish.

I was mid-mental ravishment when Mr. Man (as I came to call him) upset the applecart by bursting into tears. As quietly as he could, of course, but tears. A stop later, still crying. Stop after that, still crying. I got up, moved into the seat next to him but across the aisle, and said, "What the hell're you reading? I wanna be sure I never set an eyeball on it." That got a laugh, and he held up The Glass Castle and said it was sort of the story of his life.

We talked for four hours that day. I gave him my email and number, and things progressed pretty smoothly until one day they didn't, but that's another story.

He'd just read Walls's tale of her father taking her pubescent self to a pool-hall and getting her within an inch of getting raped, just so he'd have beer money:


Mom asked me if I was okay. I shrugged and nodded. “Well, there you go,” she said. She said that sexual assault was a crime of perception. “If you don’t think you’re hurt, then you aren’t,” she said. “So many women make such a big deal out of these things. But you’re stronger then that,” she went back to her crossword puzzle.

It struck a chord, and the story of his own stepfather's abuses of Mr. Man, and his mother's indifference to them, came spewing out of him. I've read the book before just now, specifically so I could discuss it with Mr. Man, but I did so with an already numbed horror bone and a severed humor tendon.

Only now that I am several years beyond that initial encounter with the book can I see how very funny the tragic events in it are, and were to the author. I can see that it's gallows humor of a sort...but also that it's all perfect proof that life's a Zen joke:


Mom always said people worried too much about their children. Suffering when you're young is good for you, she said. It immunized your body and your soul, and that was why she ignored us kids when we cried. Fussing over children who cry only encouraged them, she told us. That's positive reinforcement for negative behavior.

If you can chuckle at Dolly Parton's aperçu, "You have no idea how much it costs to look this cheap," then Walls is the next step up the Sisyphean slope of learning how to laugh like the Dalai Lama. It's a hard life that etches grooves in the looking-glass, but it's a path worth taking if you can get to the place where "textured" is valued more than smooth. Read the book, you'll know what I mean.
Posted by Richard at 6:30 AM