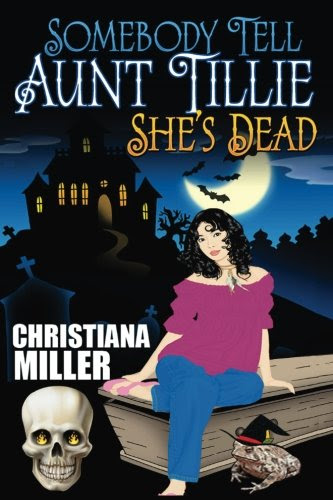 The Publisher Says: A little magic can go a long way - to really screwing up a girl's life!

Mara is having the worst month of her life. At least, that's what her cards tell her and they've never been wrong. She's evicted from her apartment, loses her job, and is banned from Beverly Hills. So when the tarot cards predict her imminent demise, she uses a little magic to make her world right.

Suddenly, an aunt she's never met dies, leaving Mara as her sole heir. But when Mara moves into her inherited home, she discovers Aunt Tillie never moved out. She's still one pissed-off old lady, even postmortem, and she blames Mara's magical meddling for her death.

When Mara accidentally releases a demon and awakens the spirit of the most powerful witch in history, Tillie's ready to kill her - literally. It's the only way she can think of to save the girl from herself. The witch and the demon, however, have other plans for Mara's body!

My Review: Mara's a thirtysomething Angeleno girl with the best kind of life a slightly portly, extremely witchy fag hag can have: Her GBFF Gus keeps her in snack food and gossip, her gay uncle/landlord keeps her in a super-cool apartment for less than market rent, and her spirit guides keep her in grocery money by enabling her to read Tarot with such accuracy she's scary. All in all, an enviably calm existence.

Until it isn't anymore. Gay uncle's new inamorato has a mama who needs a job, so he installs her as manageress of the apartment complex where Mara lives. Trouble is, the lady's a wacko fundamentalist with a major hate on for witches like Mara. Since what makes Mama unhappy keeps Uncle from gettin' laid, Mara has a month to vacate.

*Just* in the nick of time, and thanks to an ill-advised piece of spellcrafting, Mara's Great Aunt Tillie dies and leaves her a beautiful cottage in Devils Point, Wisconsin, on the shores of Lake Superior. (Side note: One pities the lassie on the first whiteout due to a lake effect blizzard, being from LA and all.) Mara packs up her entire worldly goods and sets out for Wisconsin in Gus's SUV, which she has traded her beloved 1965 Mustang convertible for (stupid woman).

Arriving in her new home-sweet-home brings many unsettling feelings, including being possessed by an ancestress, hit on by a super-centenarian, boinked to exhaustion by a ghost, and chatted up by a poison toad. It also brings a sense of complete and utter satisfaction, because after a lifetime of rootlessness, Mara is Home.

In the end, what Mara has to do to defend her home is heroically demanding of her witchly talents and worldly energies. Her life, however, is at stake, and her world finally has contours that please and delight her, so Mara sets about making what's hers safe and welcoming for her chosen family, no matter the cost to herself.

I think most of us desire a trip down the river of another's life as an escape, and so we read fiction or gossip magazines (minimal difference there), or watch "reality" TV, or listen to Faux News and pretend it's truthsome and logical.

When that mood hits, there needs to be something at hand that will scratch the itch as well as offer some pleasure in the process. This story did that for me on a few levels. I was quite taken by the characters...I've even been told by some "friends" that the annoying, arrogant, opinionated Gus reminds those perfidious ingrates of me!...and I was quite pleased with the author's plot-crafting.

I wasn't quite so taken with a few details, such as the missed opportunities for world-building and the overdrawn secondary characters that don't get the screen-time (so to speak) that their qualities set readers up to expect. Still, these are quibbles, and readily susceptible to ironing out as the series (Toad Witch, blurgh not the name I'd've chosen) progresses.

This is an investment of $3.99 that pays Kindle owners back with smiles, thrills, and fun in abundance. I say hit the Buy Now button without any hesitation.

You'd think that church of his would teach him tolerance. Whatever happened to love thy neighbor?"

"Did you miss the Crusades? The Inquisition? Since when has any fundamentalist religion taught religious tolerance?"

"You have a point," he snorted.