THE TIDE KING, immortality in an herb...take it or not? 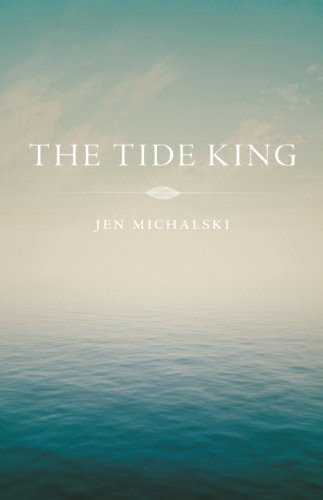 The Publisher Says: Stanley Polensky and Calvin Johnson serve in Germany during World War II. Calvin, near death after being shelled, is given a bewitched herb by Stanley but then left for dead. Each soldier returns from the war and years pass. Calvin, discovering that he cannot age and cannot die, searches for Stanley to get answers.

Michalski's The Tide King is the story of burnette saxifrage, an herb rumored in Polish folklore to provide those who eat it with immortality, and its effects on three generations of a Polish family over two continents beginning in 19th-century Poland and ending in 1976 America.

But it is also the story of young men’s sacrifice during great wars, of a young child's experiences during the holocaust and being a war orphan, of the curiosities of the American century, such as 1950s country music and smoke jumpers in the Montana mountains and 1970s New York. Just as Viking king Cnut, who was rumored to be so powerful that he controlled the tides at his feet, discovered “how empty and worthless is the power of kings,” Calvin Johnson and others cursed by the herb find in The Tide King that the power of youth and immortality is an empty gift, for they will continually witness the death of their families, lovers, dreams, and ideals.

My Review: Magic, real magic, carries a price that must be paid, and requires a coldness of spirit that can't be faked. Amateurs cannot fathom the horrors they unleash by assuming that magic fixes things, makes things better, creates rather than destroys.

Jen Michalski knows this. She writes her fable of eternal youth and perpetual healing as the painful, costly thing it is. Michalski offers this modern take on The Picture of Dorian Gray as a parable of kind intentions gone metastatic. Stanley Polensky means well when he curses the dying Calvin Johnson with eternal youth. Calvin Johnson means well when he offers his "gift" to the one woman he's ever loved, as she is old and dying. Heidi Polensky, daughter of a mother who wanted nothing to do with her and a father who didn't sire her, means well when she curses herself with eternal youth to keep her one true love, Calvin, company.

And none of these good intentions have the slightest effect on the painful reality: Control is an illusion, and control of death is fraught with so much unknowable baggage as to be a terrifying power much to be avoided.

Michalski, much published and well versed in the narrative arts, gives us a chilling ride through the blasted emotional landscape of life's losers. Stanley and Heidi are the people one sees walking to the bus stop, hunched and defeated, going...well, I've never known where they're going, can such sad faces actually have jobs, or families, or lives? Surely they're actors, characters...but here they're alive, and yes they're as sad and defeated as their faces. But they're also human beings longing for more, and tragically, they get it.

Like characters from myths, the Polenskys haven't learned what to hope for, wish for, or how to use a gift (sparingly and after much thought!), because no one anywhere ever has believed they could have a gift at all. But Calvin, the recipient twice over of the Polensky's gifts, is possibly more to be pitied than even they are. A golden boy who will eternally be a boy, grows into an angry and desperate man, choosing dangerous and difficult things to do with his unearned life, and "succeeding" at every turn.

But alone. Always, forever, beautiful and accomplished and alone. It is so unspeakably frightening to imagine being beautiful and isolated by a secret no one could possibly dream is true....

Had the novel focused on these three characters, and spent its time exploring their realities, I'd give it my highest recommendation in spite of copyediting problems ("$230 dollars" is one tooth-gritting example). But the introduction of a magical elder, Ela, and her Holocaustic childhood plus the portentous attempt to draw the herbal curse from a misty past, falls very flat for this reader. The ending, a journey undertaken to fix that which the characters' "gifts" have broken, is a hollow clanging hatch being shut on a well of wonderful ideas.

The very real pleasures of Jen Michalski's writing are enough to make the novel well worthy of your book-buying dollars. It makes me feel sad that I can't be passionately warbling paeans of encouragement to you. But I am sure that, if you buy the book, you will spend pleasurable hours savoring its mellow, lovely prose. And that's enough to make it worth you while.

Email ThisBlogThis!Share to TwitterShare to FacebookShare to Pinterest
Labels: 3-plus star review, be careful what you wish for, immortality, SF, witchcraft, WWII setting