DEMON OF THE AIR, Aztec Mexico City had murders too 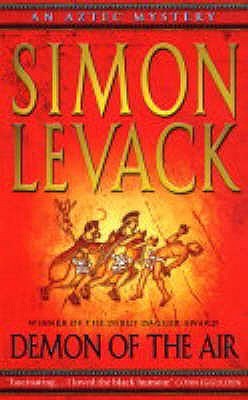 The Publisher Says: Mexico-Tenochtitlan, in the year Twelve-House: the vast, teeming city of the Aztecs at the height of its glory. sacrificial victim up the steps of the Great Pyramid to celebrate the Festival of the Raising of Banners. at the ritual slaughter of the so-called Flowery Death. Yaotl's only worry is how to explain it to his master. questions about the sorcerers who have vanished from his impregnable prison, Yaotl realises he needs answers soon. threaten the future of everything he knows.

My Review: I felt transported to pre-Conquest Tenochtitlan. The main character is a very complex and involving man, and it's fun to get to know him. The world he inhabits is deeply interesting and drawn in careful, artlessly presented detail. Levack should give lessons in world-building to most historical novelists, since evreything I learned was tied to character development not to mere didacticism.

The mystery itself was not as wonderful as the storytelling that got us to the end. It's predictable, and I can't say that I as a queer man appreciated the villain's queerness being presented as a source of his villainy. It's accurate to the times and the culture, of course, and there's nothing that suggests it's gratuitous except that one really didn't need any information about sexual orientation to make the mystery make sense.

A flaw, and a serious one at that. It feels like the author could be venting some personal animus in this characterization, though I have no evidence of this and can't support it with anything aside from my own feelings. An entire star taken off my personal rating. But withal, the author's abilities are such that I have all the books in the series lined up on the night-table ready to be read.