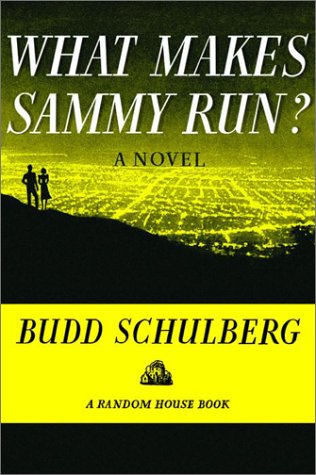 This is the question Schulberg has asked himself, and the answer is the first novel written with the indignation that only a young writer with talent and ideals could concentrate into a manuscript. It is the story of Sammy Glick, the man with a positive genius for being a heel, who runs through New York’s East Side, through newspaper ranks and finally through Hollywood, leaving in his wake the wrecked careers of his associates; for this is his tragedy and his chief characteristic—his congenital incapacity for friendship.

An older and more experienced novelist might have tempered his story and, in so doing, destroyed one of its outstanding qualities. Compromise would mar the portrait of Sammy Glick. Schulberg has etched it in pure vitriol, and dissected his victim with a precision that is almost frightening.

When a fragment of this book appeared as a short story in a national magazine, Schulberg was surprised at the number of letters he received from people convinced they knew Sammy Glick’s real name. But speculation as to his real identity would be utterly fruitless, for Sammy is a composite picture of a loud and spectacular minority bitterly resented by the many decent and sincere artists who are trying honestly to realize the measureless potentialities of motion pictures. To this group belongs Schulberg himself, who has not only worked as a screen writer since his graduation from Dartmouth College in 1936, but has spent his life, literally, in the heart of the motion-picture colony. In the course of finding out what makes Sammy run (an operation in which the reader is spared none of the grue-some details) Schulberg has poured out everything he has felt about that place. The result is a book which the publishers not only believe to be the most honest ever written about Hollywood, but a penetrating study of one kind of twentieth-century success that is peculiar to no single race of people or walk of life.

My Review: Budd Schulberg got a lot of grief for writing this "anti-Semitic" shriek of outrage at the backstabbing, grasping, greedy, hollow culture of Hollywood. Well, how else could he tell the story? The moguls of the time were almost all Jewish, and they weren't nice little yeshiva boys but street toughs with chips on their shoulders hell bent for leather to make it to the top.

Today it is a lot less true of Hollywood's power elite. Not the behavior, the Jewishness. The behavior is intact! Of this I assure you from personal experience. And people of both genders and all religious and cultural affiliations enact it there. Awful place. As one would expect from any place where there is that much money floating around. *Breathtaking* amounts of money. The greed of these people is utterly beyond the comprehension of mere mortals. "Enough" is what you say to the chauffeur you're firing who complains it's unjust.

Reading this book was a bitter and painful reliving of my education in how "no good deed goes unpunished" and I will never re-read it for that reason. But dayum! What a glorious excoriation of the moral midgets who make our movies, TV shows, and music! I am in *awe* that Schulberg got away with writing it and stayed in Hollywood! Steven Spielberg, that maker of iconically positive movies, said the book should never be made into a movie because it's too anti-movie-biz.

Guess what: It never has been. Even Ben Stiller, who wanted to star and direct, couldn't get it done when he was at his peak of fame and power.

Shows you just how true it was, is, and will remain. *shudder*