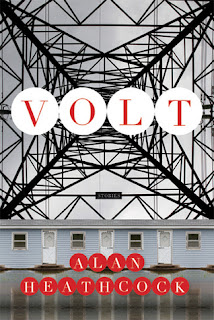 The Publisher Says: A blistering collection of stories from an exhilarating new voice

One man kills another after neither will move his pickup truck from the road. A female sheriff in a flooded town attempts to cover up a murder. When a farmer harvesting a field accidentally runs over his son, his grief sets him off walking, mile after mile. A band of teens bent on destruction runs amok in a deserted town at night. As these men and women lash out at the inscrutable churn of the world around them, they find a grim measure of peace in their solitude.

Throughout Volt, Alan Heathcock’s stark realism is leavened by a lyric energy that matches the brutality of the surface. And as you move through the wind-lashed landscape of these stories, faint signs of hope appear underfoot. In Volt, the work of a writer who’s hell-bent on wrenching out whatever beauty this savage world has to offer, Heathcock’s tales of lives set afire light up the sky like signal flares touched off in a moment of desperation.

My Review: When reviewing collections, it's hard to know what to say about them whole and entire unless they're linked stories. With a group of stories like this book is, it's easiest and, IMO, best to adopt what I've called “The Bryce Method” in honor of an online friend who introduced me to the technique: A summary opinion, plus a short line or a quote from each story, together with a rating for the story. So as my summary opinion, I offer this: Bleak is not always to be avoided. Sometimes art needs shadows to prove there's light. These stories aren't feel-gooders, and shouldn't be attempted by those in need of uplift. There is none here, but not one of these tough, scrappy folks is gonna lie down and die any time soon. They're too scared of the God they're sure they'll meet on the Other Side.

The stories in book order:

The Staying Freight gives new and chilling meaning to “Took a walk, Be back soon.” Why? Coming back is going backwards. Winslow Nettles needs, and needs badly, to go forwards. 3.5 stars

Smoke is a horrible moment in a no-better-than-you man's life, one that changes him forever and not for better. How can one human bear a burden of sin alone? Better, when you're afraid of the god that you've invented, to load some onto an innocent other. Horrifying, and just beautiful. 4.5 stars

Peacekeeper brings justice to a world where there isn't any, courtesy of the local grocery-store manager turned Sheriff. Is lying always wrong? After reading this, you won't think so. A beautiful and thought-provoking modern morality tale, complete with purifying flood. 4 stars

Furlough couldn't be more horrible: A man, not a dumb kid, leads a young woman to the kind of rough justice that makes a civilized person's stomach churn. That he hates it, that it is vile and cruel in his eyes, is probably worse than the resulting nightmare. Spare, elegant, and horrifying. 4 stars

Fort Apache sets the purposeless present and the vacant future against the void inside adolescent souls and the results explode into fire, chaos, and that angst of inchoate longing that humans will do anything to escape. 4.5 stars

The Daughter sets a mother lost to random accident, a daughter whose grief severs her ties to reality wile making the whole world painfully abrasive, and a mother-of-all-storms loose in a cornfield maze. Returning to life, such as it is, is always painful, but it takes the pain of a neighbor's child to turn the daughter's rage outward again. 4 stars

Lazarus is the least successful story, to my mind anyway, but it's still head and shoulders above most anything else I've read this century. When a man is wreathed in the smoke of sacrifices to his vicious god, how can he offer moral guidance? By remaining empty. Then what's needed most, right then and there, can fill you up and come out for who needs it. “It's your song, son...It's not for me to name.” 3 stars

Volt sets the Sheriff, sworn officer of the court, against everything her hometown's about, and against her own ideas of justice instead of the law, as she cooperates with the city cops in bringing a convicted felon/Iraq war veteran in for a court date. 5 stars


...”One world was like it was back home, where folks ate cheeseburgers and kids had sleepovers and ball games and people went to work and got angry over stupid shit that didn't matter. Like their TV ain't no good, or they ain't got the right sneakers. Some shit like that.… But then there's another world, where folks ain't got a goddamn thing, and these motherfuckers'll try any damn thing to blow your ass to dust. Sarge says it was up to us to keep them worlds apart, and if we thought that shit that happened over there wouldn't make it back to some little girl's sleepover then we had our heads full-way up our asses. ...Supposed to rally us, I guess. ...But then I had to go back out that next day and the next and all I come to think on was how I ain't never had no sleepovers or ball games or none of that shit, and didn't none of it make a damn lick of sense.”

Well. There it is. The people who fight for the rights of us all don't have the privileges of us few. And we wonder how come there are so many walking wounded out there screaming their pain with their guns and dancing to the tune of radio mullahs whose hate and bile spewing nonsense feels just like their listeners do inside.

These are beautiful and brave and sad and wrenching demands for anyone with fifteen dollars to spend on a frippery like a book, or with enough luck to live where there's a library, to pay attention.

Ours is not the only world. No oceans separate us from the enemies we've made within.