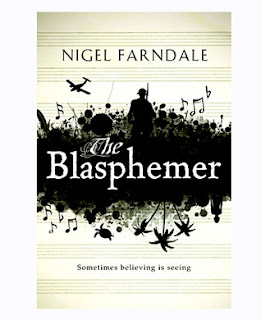 The Publisher Says: On its way to the Galapagos Islands, a light aircraft ditches into the sea. As the water floods through the cabin, zoologist Daniel Kennedy faces an impossible choice - should he save himself, or Nancy, the woman he loves?

In a parallel narrative, it is 1917 and Daniel's great grandfather Andrew is preparing to go over the top at Passchendaele. He, too, will have his courage tested, and must live with the moral consequences of his actions.

Back in London, the atheistic Daniel is wrestling with something his 'cold philosophy' cannot explain - something unearthly he thought he saw while swimming for help in the Pacific. But before he can make sense of it, the past must collapse into the present, and both he and Andrew must prove themselves capable of altruism, and deserving of forgiveness.

The Blasphemer is a story about conditional love, cowardice and the possibility of redemption - and what happens to a man of science when forced to question his certainties. It is a novel of rare depth, empathy and ambition that sweeps from the trenches of the First World War to the terrorist-besieged streets of London today: a novel that will speak to the head as well as the heart of any reader.

My Review: Of the three books in here, I like the First World War narrative the best, followed by the London story of academic backbiting and relationship angst, and least of the three the underdeveloped metaphysical events connecting those two. One character says in the course of stitching the stories together that Darwin described angels as creations of Man, which "...have been described as the most beautiful conceit in mortal wit, and I would go along with that."

And that, me hearties, is that.

Daniel, our modern main character, sees his great-grandfather Andrew as he swims to safety. The World War One soldier was a deserter, which is a deeply shocking and shaming thing in the context of the day. Daniel's decision to save himself and not his pill of a baby-mama struck me as most tolerant of him, since I'd've taken the chance to shove her deep into the wreckage so as to be shut of the nightmare carping whinging misery-guts once and for all.

What unites these men across the generations is their cowardly self-preservation, a trait that ultimately lets each create a future for himself and for unknown descendants. It's hard to fault the men. It's hard for them to forgive themselves. It's an interesting counterpoint that Farnsdale sets up: Andrew saves himself from mass insanity and all-but-inevitable senseless death, and Daniel saves his own hide from an accident that will imperil few. Are either of the men "correct" or "justified" in their actions/inactions?

I'm still thinking about them a year after reading the book for the second time. That's a damn good sign.

But I can't go over 3.5 stars of five. The messiness of the story lines is just too egregious for me to go up, and the inventiveness and intriguing premise are too involving for me to go down. It felt to me like the subplot of Daniel's dying father needed to be pruned out, and the characters of Hamsi the teacher and the twirling-mustachioed villain Wetherby were so broadly drawn as to be uninteresting. So while not unflawed, the book was a good, solid read with interesting philosophical points jabbing the soft, lazy parts of one's novel-reading brain.