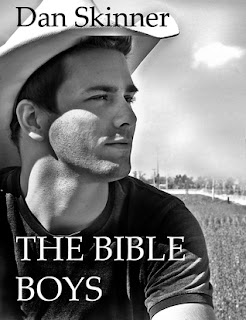 The Publisher Says: A Sin. An Abomination. Teenagers Caleb and Matthew had been told by the radical fundamentalist church that dominated their families' lives that a love like theirs—between two boys—was unnatural and forbidden. That it would damn them forever. The religion controlled their families like puppets, watched their every move, made keeping a secret almost impossible. They had only one chance to be together...and it would be a daring one right under the noses of the very people who would condemn them...

My Review: How charming this was! How wonderful the breaking-free fantasy is for all of us who don't have Golden Boy stamped on our lives the instant we're born. (Which is to say "all of us.")

But really. "I wanted to know what it felt like to be joined to you!" Spoken by a 20-year-old in the throes of passionate virginal lovemaking with his 18-year-old lover? Hell, ANYone experiencing passionate lovemaking even NOT for the first time who can be that articulate? Please. If you can focus long enough to emit a sentence like that, someone's doing something wrong.

So there's that. And then there's the religion thing, which anyone who's ever read anything I've ever posted since I got a personal ISP account in 1993 can tell you is right up my alley. Yes, religious people are unkind to those who are different, and young religious people are very unkind to everyone like all other young people. But these pantomime villains! The creepy youth pastor wantin' to nosh on some chicken! Wee bit overstated.

So it sounds like I'm going to make this a bad 3-and-a-half star review. But that's not my purpose. Mr. Skinner sets a beautiful scene with his descriptions of the Clare farm, the over-barn apartment, the flowers and the corn and the stock tank. The horse Perseus. The fireflies and the shooting stars. Just lovely, all of it.

But the stars are all for this, an essential and a true and a beautiful expression of an eternal reality we grope blindly for then so often drop and shatter when we find:


Love does not make cowards. It creates heroes.