SOMEBODY TELL AUNT TILLIE WE'RE IN TROUBLE!, hot off the Kindle and ready to make you smile 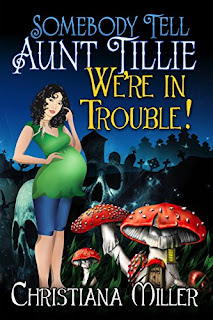 The Publisher Says: Mara’s in hell! Neither one of the guys in her life is talking to her. Paul, her ex-boyfriend, is afraid she’s going to give birth to a baby demon—complete with horns and hooves. He wants proof that he’s actually the father. And her best friend, Gus, is so obsessed with his new boyfriend and his plans for the late, great, Lord Grundleshanks the Poisonous Toad, he has no time for anyone else.

After Gus flips the seasons and manages to bring summer into winter, everything starts going weirdly wrong. Summer refuses to leave. Household electronics start going haywire. When J.J., a local boy, vanishes from Mara's car, Mara begins to suspect he's been turned into a rat. But it’s such a crazy idea, who could she possibly talk to abut it? Then, her dead Aunt Tillie shows up to warn her that Gus is in trouble—big trouble—and it’s up to Mara to save him.

Before Mara can stop him, Gus opens up a portal to Hell and the Devil comes calling. Now, she’s got her hands full, trying to find out what happened to J.J., assure Paul she’s not going to give birth to a mythological creature, and broker a truce between Gus and the Devil before Gus becomes Hell’s newest resident.

My Review: I think there's something magical about these books. I mean that in the literal, not the figurative, sense. I was casting about for a Sunday review to tart up and post on my blog, and a random person "Like"d my review of the first Toad Witch mystery at Goodreads. Why the heck not, it's the weekend, thought I, some supernatural silliness will go down a treat. Part of posting reviews to my blog is finding a link to the publisher's information; that led to Amazon; and there was an enticement to pre-order the next book in the series, which just *happened* to be dropping onto one's Kindle the next day!

I've read it now, and found it fun, light, and charming. I enjoyed my time back in Devil's Point, Wisconsin, and was happy that Mara and Gus were sparring and bantering and charging ahead into uncharted waters (in winter, in Wisconsin!), heedless and hedonistic or hangdog and fearful, and not infrequently both by turns.

I've scored it a quarter point lower than the first installment because such annoyances as possessives used for plurals, almost-correct words (instance is used, instant is meant), and variant spellings within a line of each other (the character of Forrest is called Forest several times) should, by this second book, be ironed out by a better-paid proofreader and separate better-paid copyeditor.

Irascible and brimful of zest for living, Aunt Tillie the shade reminds me of a passed-away Ruth Zardo from Louise Penny's Three Pines. Gus and Mara are a lot like Olivier and Gabri from that series, snappish and loving by turns. These are compliments, as I'm sure most reading this would know; I'm invested in the characters. I like the ongoing problems Mara has, as a mom-to-be, with her baby-daddy, because the set-up for her pregnancy is...unusual...and caused baby-daddy "Post-Possession Stress Disorder." I like the way Miller is layering in future plots based on the Hellmouth's location under Mara's cottage and the struggle against De Debbil Hisse'f it provides.

It's kind of the anti-Garden Spells, in a way; all the sweetness ripped from the bones of the story, but left behind is the generational sisterhood of magical protectresses. If that's a trope that appeals to you, the reasonable cost of these paranormal suspense novels should make them a no-brainer one-click purchase.

It worked on me, after all.

This work is licensed under a Creative Commons Attribution-NonCommercial-ShareAlike 3.0 Unported License.
Posted by Richard at 4:17 AM