FANDEMONIUM, a satire with serious bite 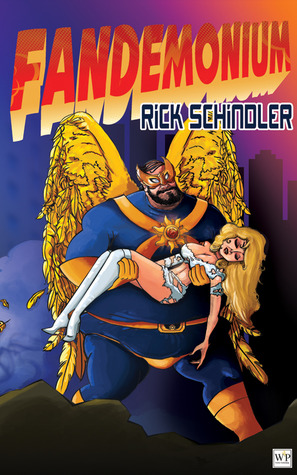 The Publisher Says: Fandemonium by Rick Schindler uses the colorful world of comics and fantasy as a microcosm and metaphor for media consolidation and the excesses of global mass culture. It is at once a hilarious satire of business and society, a portrait of an artist no longer young, and a sometimes poignant look at a universal challenge: to grow up, face the world, and put away childish things.

Ray Sirico used to have it all. Once, he was the brilliant and outrageous Clown Prince of Comics, who reinvented the venerable superhero Skylord, and ranted and rollicked everywhere from TV talk shows to Hollywood premieres.

But that was in the ’70s and ’80s. Now it’s 1993, and Sirico is a drunken has-been. His wife has left him, his movie flopped, and his comics’ publisher is doing so poorly that its new corporate parent has come up with a radical marketing stunt: the Death of Skylord.

Still, Sirico has one last chance to recapture the limelight: Fandemonium, the nation’s biggest fantasy convention. But others are coming to the con too: Harmony Storm, the sex-crazed actress who broke up Ray’s marriage; his former collaborator Tad Carlyle, who now has his own company, and a troubled relationship; Fred D’Auria, a fanboy fleeing adolescent traumas, and corporate conspirators who are plotting to sacrifice Sirico’s greatest creation for motives deeper than even his fevered imagination could conceive.

The publisher offered this book to me hoping for a kind, but asking for an honest, review

My Review: The author's bio says he has 11,000 comic books and a wife. I thought that having one of those things precluded the other. *rimshot*

I'm not a comic book person, and I'm not always sure that satire is a good choice for a whole novel. I'm cynical about fandoms in general. And first novelists are well advised to don protective gear when presenting me with their darlings, as my spleen needs regular venting.

And here I am giving this book over three stars. Will wonders never cease.

I like the novel, hate the characters, and want to shake the writer. The novel is presented in chapters that read like panels in a comic book, interspersed with screenplay bits, transcripts, etc etc. It makes the tedious trudge through the heads and lives of Harm (short for Harmony, and a good nickname for her it is) the horrid harridan, hefty humpster Ray the nebbishy loser, Taffy Poppenberg (how I **ADORE** minor non-character Taffy!) the news lady, so much less onerous. I don't get bogged down in any one PoV for long enough to lose steam. And besides I'm an old Moby-Dick fan, and this technique was superbly used in that book. Set up happy memory resonances for me. (We will NOT be discussing Tristram Shandy thenkewveddymahch.)

The characters are all well known to any follower of pop culture, business culture, or geekdom. As San Diego Comic Con has attained mainstream visibility, geekdom is less and less what it once was, a ghetto for off-kilter fen to celebrate their abnormality safely. I, an oldster without an anime-worshipping bone in my body, know what a furry is, and follow Sailor Moon refs. This is proof that there are no more hiding places for geekdom. The novel doesn't break any new ground limning the characters. It also doesn't miss a single trick damning them. I'm simultaneously aware that I'm being herded into a set of responses and reactions by the character choice and situational comedy, and amused by all the above. I'm outside the story and experiencing my responses as reactions, but then again that's the way satire works in my experience.

I do very deeply want to shake Rick Schindler. What are you doing here?! Why the hell is this book set in 1993?! To avoid the Internet? Yes yes, I was around for the comic-book publishing debacles of the era...I met the guy who started Broadway Comics...and you know what? 1993 wasn't integral to the stories you've chosen to tell and your points are still valid today, which is a damned good thing because nothing on this earth is duller than obsolete satire. Also, dig deeper! Many situations, most notably Sirico the Stout's disintegration, could have been more keenly pointedly stabbed into the reader's heart. It's possible to do this and maintain humor, see Candide for Cunégonde's marriage to Candide. (I refuse to spoiler-tag a 250-year-old book's plot points.) And not least: Really? C'mon. Really?

All that said, all my grumbles aside, there is much to take pleasure in presented here. The quiet and unobtrusive view of fans as owners versus fans as consumers of stories and characters is very relevant to today's world. The vicious and back-stabby corporate culture that exists is never a bad choice of target for skewering. The book is, in the end, about the experience of reading it, and that was a net positive use of my time. Considering the number of ways and times that could have turned out worse, this book deserves any and all praise it earns and gets my recommendation to read. Readers not comics geeks are especially encouraged to give it a whirl.

This work is licensed under a Creative Commons Attribution-NonCommercial-ShareAlike 3.0 Unported License.
Posted by Richard at 4:55 AM