THREE ACT TRAGEDY, mystery that lives up to its name 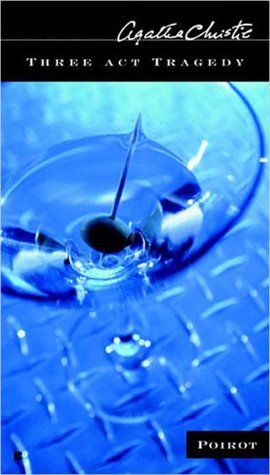 The Publisher Says: At an apparently respectable dinner party, a vicar is the first to die...Thirteen guests arrived at dinner at the actor's house. It was to be a particularly unlucky evening for the mild-mannered Reverend Stephen Babbington, who choked on his cocktail, went into convulsions and died. But when his martini glass was sent for chemical analysis, there was no trace of poison -- just as Poirot had predicted. Even more troubling for the great detective, there was absolutely no motive!

My Review: This review is of the novel, eleventh in the series, and of the twelfth-season film adaptation for Agatha Christie's Poirot. They earn the same rating.

What a beautiful-looking film this is! The setting in Cornwall is stunning, and the house they chose for Sir Charles is breathtaking! The story is the same in both media, omitting the unnecessary written character of Satterthwaite as a less dimwitted version of Hastings.

Babbington's death is only the first of three apparently utterly unrelated murders. The second murder is horribly upsetting to all the characters. The third is simply incomprehensible to mere mortals...Poirot, of course, sees it in its proper light almost immediately. When the killer is unmasked, it is a bad, bad day for Poirot and a painful and frightening awakening for the younger characters in the story.

But the murders and the motives survive intact between the media. There isn't any need to change all that much in this installment of the series; no one's motives are altered and no action omitted. And that is a very good thing. I really enjoy a puzzler, and this one was. The ending is better on film because of Suchet's pitch-perfect delivery of his last line.

But all in all, the reason I like the story so much is that the older, distinguished gentleman gets the young and comely love-object because he is, simply put, irresistible. As we were watching along, my (absurdly younger) Gentleman Caller started to giggle. He noticed the plot point, and was highly amused that I'd suggested we watch this particular episode. I like that about him, that he sees the humor that I see.

Another delightful outing for the Little Gray Cells. Each version is a treat. Pick one, or do as I do and savor both.