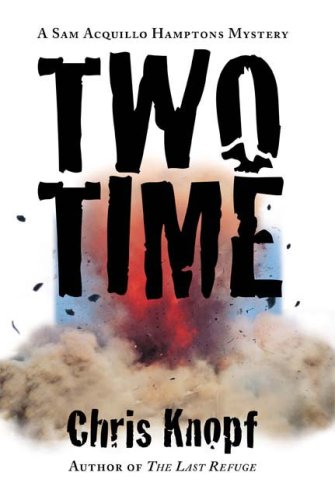 The Publisher Says: Sam Acquillo – ex-boxer, ex-corporate executive and accidental hero of The Last Refuge – is back in this action-packed, page-turning sequel. All Sam wants to do is hammer a few nails into his ramshackle cottage, drink a great deal of vodka, hang out with his dog, Eddie, and stay out of trouble. But trouble seems to find him anyway. When a car bomb outside a trendy waterfront restaurant kills a prominent financial consultant and injures Sam and his lawyer friend Jackie Swaitkowski, he is drawn into the investigation. Where the police have met roadblocks, Sam makes inroads with his trademark wit, instinct and charm. Also, he just wants to know: Why would someone go to such lengths not only to kill someone, but annihilate them?

Set, once again, against the backdrop of Southampton, Long Island, Two Time is full of moody sunsets, beachfront properties and beautiful people with an extraordinary amount of money and very dangerous secrets.

My Review: Sam Acquillo, “retired” (fired for beating up a Fortune 500 stooge who wanted Sam to do unethical stuff) engineer turned curmudgeonly champion of the abused, is back. He's still licking his psychic wounds from The Last Refuge, where his problem-solving skills were used to bring some justice to the world of Southampton Town's unfashionable Bay-side Oak Point. Amanda, the cause of his suffering, owes him her freedom from the workaday world and a husband she didn't like; she really, in fact, owes his silence her absence of jail time.

What's a divorced, lonely, bored guy to do when he falls for a, well, a slightly shopworn angel? Wave bye-bye as she motors out of town, her criminal husband's money in her new suit, that's what. Gratitude, thy name is not Amanda.

But another fun benefit of doing the right thing is that local cop Joe Sullivan now has Sam and his problem-solving skills on the radar, and the fact that Sam is a former big shot with a fancy degree means to Joe that Sam can handle the moneyed elite better than Joe can. And he needs that skill right now.

Almost including Sam. Damaging Sam's pal Jackie enough to send her into months of plastic surgery. So Sam's not exactly unwilling to do the poking around Joe wants him to do, except for his ritual growls and grumbles about ungrateful, illegal, obnoxious...you know the stuff, you have to love at least one curmudgeon, all bark and no bite.

Sam gets to know the vaporized dude's wack-job wife, the sibling rivalry-ridden younger brother, the local up-island mobster, an FBI agent named Ig, and a selection of his billionaire buddy's fellow too-rich-to-steal set. Along the way, Jackie has more surgery to fix the damage the blast did, Joe gets stabbed in Sam's front yard, Sam beats the crap out of some stupid small-time muscle working for the mobster, and puzzles together the damnedest, most WTF solution to this nasty crime that you can't imagine.

Oh. Amanda comes home, and moves in next door to Sam. Like he doesn't have enough trouble.

I like simple sentences telling exciting stories, and characters whose motivations aren't obscure or blatant, but grayscaled and textured. I like books that make the experience of reading them effortlessly fun.

I think it's a damn shame that Chris Knopf's name doesn't carry the same “oh, yeah!” response that Steve Berry's does. He deserves to. He writes well, he plots well (there are some holes in this tale, but not more than niggling ones I can't specify without serious spoilering, and some underused characters like Jackie and Ig mentioned above), he decides to tell a particular story and that's what he does from beginning through the middle to the end.

Need something to read for a summer afternoon? Want to be satisfied, at the end of the book, that Right was done? Read Two Time. Populist anti-hoity-toity tract that it is, no one goes home unscathed or unvindicated, and the privilege of the Privileged Class takes it on several of their chins.