WHY ARE YOU SO SAD?, or Updike's Rabbit in the 21st century 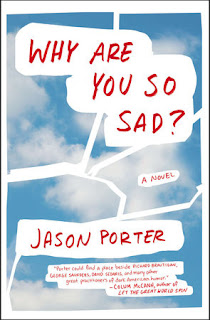 WHY ARE YOU SO SAD?
JASON PORTER
Plume Books
$4.99 ebook platforms, available now

The Publisher Says: Have we all sunken into a species-wide bout of clinical depression?

Porter’s uproarious, intelligent debut centers on Raymond Champs, an illustrator of assembly manuals for a home furnishings corporation, who is charged with a huge task: To determine whether or not the world needs saving. It comes to him in the midst of a losing battle with insomnia — everybody he knows, and maybe everybody on the planet, is suffering from severe clinical depression. He’s nearly certain something has gone wrong. A virus perhaps. It’s in the water, or it’s in the mosquitoes, or maybe in the ranch flavored snack foods. And what if we are all too sad and dispirited to do anything about it? Obsessed as he becomes, Raymond composes an anonymous survey to submit to his unsuspecting coworkers — “Are you who you want to be?”, “Do you believe in life after death?”, “Is today better than yesterday?” — because what Raymond needs is data. He needs to know if it can be proven. It’s a big responsibility. People might not believe him. People, like his wife and his boss, might think he is losing his mind. But only because they are also losing their minds. Or are they?

I RECEIVED THIS BOOK FROM LIBRARY THING'S EARLY REVIEWERS PROGRAM

My Review: Reading this book is like watching Jim Carrey play Rabbit Angstrom in a shelved TV pilot of Rabbit, Run. It's like reading John Updike's hitherto-unknown draft of a spec script called Eternal Sunshine of the Spotless Mind. It's quite similar to a lost Seinfeld episode in which George and Kramer get drunk and fool around...or was that an ayahuasca-fueled nightmare...?

I'm not quite sure why the publisher labeled this satire. It's black comedy, and quite dryly amusing in many spots. It's satirizing...what? Modern Society? Permaybehaps I'm no longer With It and don't get the satire. That's more than a little possible.

Porter has an MFA (ruh-roh, Raggy) from Hunter College and is blurbed by my dote Colum McCann. I entered these portals an eager acolyte in the making. I exited the service entrance wondering just how the hell I got onto the loading dock. The not-really-an-ending felt like I was here at the business end of the edifice but there wasn't a delivery truck in sight.

But two things have stuck with me, two contributions to my ever-smaller stock of Stuff I Want to Remember:
1) The image of happiness, complete and sincere and freshly made happiness, as like the feeling of putting new socks on clean feet. Can't pull the quote without spoilers. But the image is instantly relatable and also fresh (pun optional).
2) The Fearless and Searching Moral Inventory (how twelve-steppy I'm feeling today!) that Ray passes around in questionnaire form. I love it!


Why are you so sad?
Are you single?
Are you having an affair?
Are you who you want to be?
Would you prefer to be someone else?
Are you similar to the "you" you thought you would become when as a child you imagined your future self?
When was the last time you felt happy?
Was it a true, pure happy or a relative happy?
What does it feel like to get out of bed in the morning?
Do you realize you have an average of 11,000 to 18,250 mornings of looking in the mirror and wondering if people will find you attractive?
Do you think people will remember you after you die?
For how long after you die?
Do you believe in life after death?
Do you believe in life after God?
Are you for the chemical elimination of all things painful?
Do you think we need more sports?
Have you ever fallen in love?
If yes, were you surprised that it, like all other things, faded over time?
Do you hear voices?

It's like a sociology class exercise designed by someone who's drunk and lonely. I was bemused that this questionnaire was a central organizing device of the sort novel. It took up a lot of space that would have been more satisfactorily used in traditional means of character development, either of Ray himself, or the people answering his trippy survey. But it made me smile, of itself and as a shortcut to the purpose of making readers invest in the lovable loon that is Ray.

My life may not be changed by the book, but my smile muscles are exercised and my chuckle-box got wound up a time or three. I call that a win.
Posted by Richard at 5:47 PM