THE ADVENTURE OF THE CHEAP FLAT, Poirot episode & story 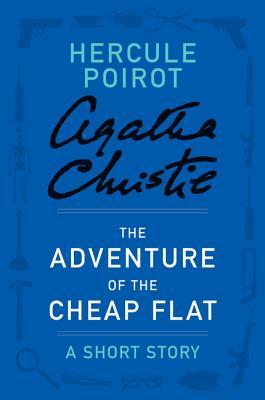 The Publisher Says: A classic Agatha Christie short story, available individually for the first time as an ebook.

Poirot is fascinated by Hastings’ talk of an unusually ‘dirt cheap’ flat in an expensive part of London. With his suspicion aroused Poirot cannot resist investigating, much to Hastings’ dismay who thinks nothing of it…

My Review: The Kindle Single is 99¢; the Agatha Christie's Poirot episode from the second season is free on Acorn TV.

Honestly, Christie was a snobbish pill, wasn't she. Such a horrible opinion of Americans, of all foreigners apparently, and it makes some of her stuff not fun to read. This one, short as it is, caused me agita twice...the American chanteuse and the FBI agent in the filmed version are take-offs of Christie's musical-comedy versions of the New York Italian in the story...and the very Christie-ish withholding of knowledge from the reader. How does Poirot know about the espionage case? Ant any rate, I like the filmed version a good deal better. That's becoming the norm for me with Ma Christie.

This second-season one-hour episode is more fleshed out and fully realized than the story, as is to be expected; but it also offers a bit more fair play for the viewer than the reader, as we learn with Poirot and Hastings the workings of international "cooperation" involving the case. Still, the offensiveness of the American stereotypes prevents me from rating this any higher than I have, and honesty prevents me from giving in to my displeasure and downrating an involving and interesting episode in the TV series below this.

But I really want to.

This work is licensed under a Creative Commons Attribution-NonCommercial-ShareAlike 3.0 Unported License.
Posted by Richard at 5:26 PM