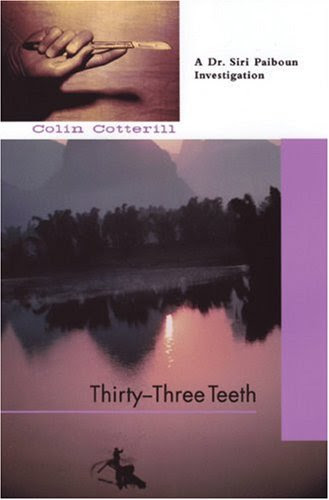 The Publisher Says: Feisty Dr. Siri Paiboun is no respecter of persons or Party; at his age he feels he can afford to be independent. In this, the second novel in the series, he travels to Luang Prabang where he communes with the deposed king who is resigned to his fate: it was predicted long ago. And he attends a conference of shamans called by the Communist Party to deliver an ultimatum to the spirits: obey Party orders or get out. But as a series of mutilated corpses arrives in Dr. Siri’s morgue, and Nurse Dtui is menaced, he must use all his powers—forensic and shamanic—to discover the creature—animal or spirit—that has been slaying the innocent.

My Review: Returning to Vientiane, Laos, a good three months after we left it in The Coroner's Lunch, Colin Cotterill drops us in the midst of Laotian Hell: It's the hot season, before the rains, and so the entire nation greets each other with, "Hot, isn't it?" Responding, "Damned hot."

I felt that horrible, stifling, miserable heat the entire time I was engrossed in the two mysteries Dr. Siri Paiboun, Laos's only coroner, sets out to solve. The first is a truly terrifying series of maulings, which are blamed on a Malay black bear recently escaped from terrible, cruel captivity at a local luxury hotel's menagerie. Dr. Siri sees the first victim in his morgue, determines there's no human agency in the death, and goes home...there to awake with a black bear breathing on him! He suspects his last earthly moments have come, but the bear merely shambles off after communing with him for a time. More maulings are reported over the course of the book, but the bear herself is not found despite an intensive manhunt.

The next layer of mystery announces itself with a strange death at the Ministry of Sport and Culture. An official charged with overseeing the Ministry's archive is found dead at the base of the fountain in the square the Ministry's on, clearly having been precipitated from the roof. The archive is locked, the only key is on the inside of the door, and the official can't possibly have thrown himself that far from the building. Siri breaks into the archive with his pal Inspector Phosy, last seen as a covert cop, and now a Vientiane police inspector. They discover a chest with the Royal seal intact on it, and can't bring themselves to open it because of its evil aura. Siri warns Phosy and his fellow officers to stay away, he will find a way to get into the chest using his newly discovered connections to the Other World; reluctantly they agree; Siri must now figure out what to do, since he has not Clue One how to manage evil spirits.

And here is where Cotterill takes this tale from a very good 3.5 to near 4 stars, over the bar, and into the four-star world. Siri is summoned to Luang Prabang, Laos's ancient Royal capital, to look into the deaths of two men whose identities the Communist authorities are eager to discover for reasons they won't go into. Siri meets the spirits of the men, uncovers a vicious and wicked betrayal, and brings the malefactor to Justice, instead of legal justice. In the process, Cotterill introduces Siri and the reader to the Laotian kingdom's central spirit repository, and reveals the unhappy reason for an unhappy nation's descent from quiet prideful independence into ever-increasing want and lack. The scene of the reveal is so moving and so affecting that I was compelled to read it twice.

Far from leaving his readers there, though, the author then proceeds to tie in and tie up the maulings with Siri's morgue nurse, Dtui, earning her detective stripes (literally) by her determined and courageous pursuit of a solution to the mysterious animal's whereabouts, taking her from Comrade Minister Civilai's world of the Politburo (where the old codger is the Voice of Reason, an exhausting and thankless task, making him miss his youth spent in the jungles as a freedom fighting boon companion to Siri), to the hidden world of the prisons Laos isn't supposed to need anymore in the Socialist Paradise, and finally to the ragged edge of her own life at the mercy of the evil forces causing the mutilation killings. Siri and his boon companions wind all the loose ends into a very, very happy ending, though just as in real life, there are prices to be paid for all happiness...but on balance, the good outweighs the painful and unhappy.

Oh my heck. I just can't get over several scenes in this book, the one I won't spoiler that I mentioned above, but also some character scenes that I was moved by. One involves Comrade Coroner Siri, Comrade Minister Civilai, and Comrade Inspector Phosy having lunch by the river, something that childless Siri and Civilai have done together often, but now include the unmarried, middle-aged Phosy in. The scene comes at a very interesting point, where Siri has just confirmed that he (like Buddha) has thirty-three teeth which marks him out as a being who is a bridge between the Other Realms and the mundane world we all live in. It feels like the reader is the quiet fourth person watching a pair of old uncles chaffing and loving their younger, respectful nephew, all with the quietest and most enjoyable teasing sweetness. I was very pleased and honored to be allowed into their moment of closeness, and then remembered that the author was creating this scene, not recording or reporting it.

And then there came a moving scene between Siri and Nurse Dtui, which I can't talk about for fear of spoilering events. I hate that I can't talk about it, but to anyone who has felt the ghastly sense of anti-climax when reading a spoilered ending, I need not explain my hesitation. Suffice it to say, Nurse Dtui is more of a daughter to Siri than even he knows yet.

Four full and happily given stars, plus a quarter star to grow on. This is a series my mystery fanboy heart has embraced for good.

This work is licensed under a Creative Commons Attribution-NonCommercial-ShareAlike 3.0 Unported License.
Posted by Richard at 7:30 AM