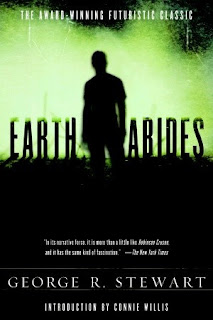 The Publisher Says: A disease of unparalleled destructive force has sprung up almost simultaneously in every corner of the globe, all but destroying the human race. One survivor, strangely immune to the effects of the epidemic, ventures forward to experience a world without man. What he ultimately discovers will prove far more astonishing than anything he'd either dreaded or hoped for.

My Review: Call him Isherwood. (Cause that's his name.) On a camping trip in the mountains, Ish gets bitten by a rattlesnake and barely survives. Clearly he can't call for help on his cell because 1) the mountains and 2) 1949. After all his sufferings, Ish drives down the mountain and finds humanity...in Los Angeles...gone. Just not there. (Oddly, there are also not heaping mounds of dead bodies everywhere...he's only been gone a week or so, and the Plague killed quick. That nit being picked, I resume.) Ish spends his time alternately looking for survivors and ruminating on the justice and inevitability of the plague:


As for man, there is little reason to think that he can in the long run escape the fate of other creatures, and if there is a biological law of flux and reflux, his situation is now a highly perilous one. During ten thousand years his numbers have been on the upgrade in spite of wars, pestilences, and famines. This increase in population has become more and more rapid. Biologically, man has for too long a time been rolling an uninterrupted run of sevens.

When he stops being stunned, he sets out to contact and assess his fellow survivors. He spends a lot of the book out a-wanderin', and he picks up here and there some fellow remnants. No one is a medical research genius or a high government official or anything, thank goodness, so no one knows where this plague came from, how many are dead in other places, or any of that other stuff that pockmarks other post-apocalyptic stories I've read. I completely buy that the survivors are shocked and isolated, where I've always been hmmphy about the better-informed-character stories.

Any road, time passes, life goes on, babies are born and people die and food is grown in tune with nature. We revert, in other words, to the way things were for ~10,000 years before monoculture and factory farming. Ish ages, and the younger people without strong attachments to the pre-apocalyptic world start to think about what the meaning of life is:


If there is a God who made us and we did wrong before His eyes—as George says—at least we did wrong only because we were as God made us, and I do not think that He should set traps. Oh, you should know better than George! Let us not bring all that back into the world again—the angry God, the mean God—the one who does not tell us the rules of the game, and then strikes us when we break them. Let us not bring Him back.

If there is an apocalypse while I'm alive, I'm makin' this my post-apocalyptic mission: Disestablishing religion. Ish is my soul-brother in this regard. But as you can imagine, he's fighting a rear-guard action despite being the oldest person anyone knows, and also the last survivor of Before in the Now. Having lived through the AIDS apocalypse, some days I feel the same way.

And as it must, Death comes for Ish at last, putting an end to his moanings about the stupidity of the human race for making the same mistakes that cost us so dearly before, his pessimistic views on the sustainability of his made tribe, and his invaluable store of knowledge...despite the fact that the whippersnappers don't listen:


Then, though his sight was now very dim, he looked again at the young men. "They will commit me to the earth," he thought. "Yet I also commit them to the earth. There is nothing else by which men live. Men go and come, but earth abides."

I suspect all of us over a Certain Age feel this way to a greater or lesser degree. Plague or no plague, Youth isn't inclined to listen to Age, and apocalypse is relative. My apocalypse...the endangerment of tree books...is youth's Bright New Dawn, bulkless environmentally sound infinite stories! Yes, I'm going, I'm going, stop pushing me!
Posted by Richard at 4:00 AM