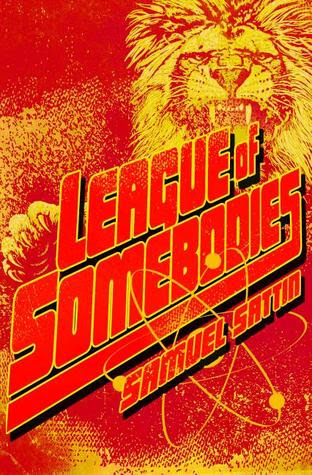 The Publisher Says: Lenard Sikophsky’s father has been feeding him plutonium since the age of six in the hopes of making him the world’s first bona fide superhero. First, he must pass the unusual tests of manhood locked in the centuries old tomb, The Manaton, a secret relic passed down for generations. Falling in love with the beautiful, compulsively suicidal Laura Moskowitz doesn’t make his life any easier. But with the guidance of the Sikophsky men, the antiquated rulebook, and of course a healthy amount of plutonium, Lenard accepts his fate as an exactor of justice. . . .

Twenty years later, Lenard’s son Nemo is introduced to the same destiny as his father, only this time the violent entity called THEY are in dangerous pursuit. Lenard’s life and the legacy of his family are put to the test when he is forced to defend everything he loves.

My Review: Well! THAT was fun. I liked reading Sattin's just-slightly-OTT prose, I liked the comic-booky story, and I liked the relative absence of typos and mangled parallelisms.

I thought I would scream occasionally...the women in the book are, well, how to put this diplomatically...girls. No other way to say it, they're girls, in the old-fashioned pejorative white-man-on-top sense.

And Nemo is less introduced to his destiny than inducted into it. Like Geek Love, a disturbing book on similar themes of parental manipulation and dysfunction, each generation of Sikophsky boys has A Destiny and Will Follow It. Or Else. This being an evergreen theme, I was really looking forward to Sattin's trippy take on it.

In this, I wasn't in the least disappointed. I offer this odd little passage from the book as evidence of Sattin's skill with trippy:


In 2003, Lantana, The Savage, Zatkin, watched the sky over Kansas for signs of impending doom.
In that forlorn sea of cattle, wheat, corn, and sorghum grain, he'd come to Finney, following the anonymous, electronic chortle of a villain calling himself The Brother who apparently had a nuclear bomb aimed and ready in the direction of the Sunflower State.
Lantana watched the sky, his toga still in the humid Midwestern slough as the sun made hell of his retinas. He wasn't sure he even believed that The Brother existed, that this anonymous, self-proclaimed villain, in all probability, was some sex-deprived soul out of Ohio with a mouse pad and a pink, pimpled penis.

Trippy, like I said. The image of a superhero named after a flowering vine standing in a cornfield with his glad-rags limp in the heat? Yes, priceless. Contrasting that with the old stand-by nerd stereotype, effective.

But therein also the problem with the book. This is a good idea, told well enough to go over, and not an out-of-the-park homer for one big reason: A lot happens, and very little changes. As I've made this same observation about Neil Gaiman's works (and been trounced and screamed at for it), this problem isn't unique to Sattin. I do wish the ending hadn't been quite so...not rushed, exactly, but tacked-on feeling. The natural end of the book was earlier, in a wide and featureless sky. Then came a bad case of the knit-knit-knits as some future history was rammed down my throat, fitting about as well as a long woolen scarf would on an August day.

But hear this: I enjoyed this weird and wonderful journey. I'm glad I took it, for all that I had reservations about it. Sattin deserves a shot at your eyeballs. He's got more to say.