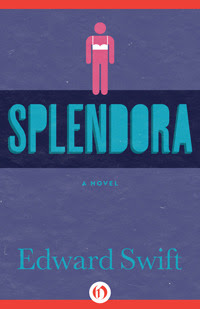 The Book Report: The book description rots on ice. Here is the jacket copy from the 1978 hardcover I checked out of the library:

“Splendora: A steamy East Texas armpit of a town where Sue Ella Lightfoot furthers her study of “sexual motives” with every issue of Real Crime magazine while Agnes Pullens drills young ladies in the finer arts of Dance and Expression (tap-dancing, tumbling, and recitation inclusive) and Zeda Earl Goodridge faces a life of ruin if her Christmas yard display doesn't take first prize this year. Timothy John Coldridge was born and raised here, was fussed over and admired by all—Esther Ruth's beautiful grandson, Little Timothy John.

At eighteen, Timothy John left Splendora, unhappily. Now, at thirty-three, he returns with a dazzling companion: Miss Jessie Gatewood, the new hired-by-mail librarian, come to operate the county bookmobile. Draped (and impeccably accessorized) in Victorian finery and drenched in social graces, Miss Jessie takes the town by storm. But though it might be said that Timothy John arrived with her, it might also be said that he arrived within her...and therein lies the tale. Aided at every turn by a cast of relentless eccentrics, Miss Jessie endures a series of thoroughly splendid adventures. But while genteel romance, high drama, torment, and Technicolored bliss capture center page (Can the organza'd charms of a spinster booklady capture the cloistered heart of Assistant Pastor Brother Leggett? Will Maridel Washmoyer's yardful of Styrofoam igloos thwart Zeda Earl's anticipated Yuletide triumph?) a more subtle underscoring theme persists: What can Timothy John mean to Splendora...or Splendora to Timothy John?”

Well. Um. You see, I was really young when I read this, and in the throes of coming to terms with impending fatherhood. I figured if you were a gay guy, you'd like to be a woman, like Timothy John seems to want to be. (The idea of transgendered people was not part of my mental furniture.) I'd banged a bunch of guys by this time, and I knew for sure and certain that I wasn't interested in a life of bread-and-water imprisonment within heterosexuality's grim and cheerless razor-wire fences and brooding gun emplacements, but kid = duty so I did it. At least with other guys I knew what the hell we were talking about. But books like this one, they set me on a completely wrong path. Gay, woman...same diff, right, since Timothy John lived as a woman, right? I DO NOT WANT A WOMAN NOR TO BE A WOMAN said my insides. But look! said the outside world, it's in a book!

So I laughed when I was supposed to and patted myself for being Literary Enough to get the point of Swift's humid plot (Miss Jessie and Brother Leggett get engaged but Bro can't deal and comes out to Miss Jessie who says hey cool me too and they have a religion/salvation fight and one thing leads to another and Timothy John burns down his house while Brother Leggett is racing up to spirit him away to live as man and whatever and the town matriarch speeds them off with a happy {if toothless, this is East Texas we're talkin' about} smile). But reinforcing the wrong ideas in my head did not make my life easier, nor did a subsequent encounter with The Carnivorous Lamb with its brother-incest lovers. EWEWEW. No thanks! Gordon Merrick cheesy romances! Yes! But then there was that whole duty thing.

I held onto this as my idea of a Good Gay Novel for a very long time. Re-reading it now, at over 50, I realize it's an artifact of the author's past...it's set in some amorphous 40s-50s type time when there was train service to burgs like Splendora...it's gawkily written, it's pretty garishly bedizened with Faulknerian structure and O'Connoresques of characters, and if this were my first read, I'd probably Pearl Rule it and move on with my day.

Time may indeed heal, but it also inflicts, wounds.
Posted by Richard at 4:00 AM