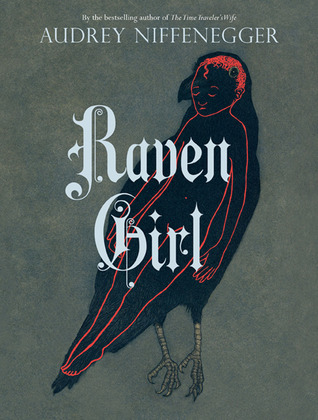 The Publisher Says: Once there was a Postman who fell in love with a Raven.

So begins the tale of a postman who encounters a fledgling raven while on the edge of his route and decides to bring her home. The unlikely couple falls in love and conceives a child — an extraordinary raven girl trapped in a human body. The raven girl feels imprisoned by her arms and legs and covets wings and the ability to fly. Betwixt and between, she reluctantly grows into a young woman, until one day she meets an unorthodox doctor who is willing to change her.

One of the world’s most beloved storytellers has crafted a dark fairy tale full of wonderment and longing. Complete with Audrey Niffenegger’s bewitching etchings and paintings, Raven Girl explores the bounds of transformation and possibility.

My Review: The UK Book-A-Day meme, a book a day for August 2014, is the goad I'm using to get through my snit-based unwritten SF-book reviews. Today's prompt, the second, is to discuss a book that perfectly pairs word and image.

Thank you to the LibraryThing friend whose glowing review made me want to read this short book with illustrations in it. (NO, it's not a comic book, there is nary a speech bubble to be found and no one is running around in a silly costume!) Like every good fairy tale, Raven Girl starts out with an impossible premise...man and bird fall in love and have a child...that leads to the complicated, painful life of a character we can all see little shards of our own shells in. The Raven Girl speaks Raven like her mother, has a human body like her father, and cannot be human or raven. In her struggles to manage her mixed identity, she is isolated; can't everyone understand that feeling of "no one gets it" from the inside? "I can't talk to you," aka the Wail of the Adolescent Angstbeast, "you have no idea what it feels like to be me!" Only this time she's right. No one else is like her, not her parents who love her, not anyone in the whole world. 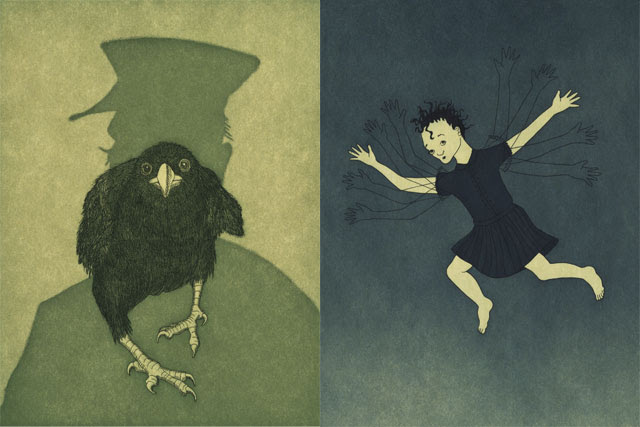 In the end, she chooses a radical, risky, permanent solution to her identity crisis, and faces down the anger and the fear of others; but this story's major point is one I am so pleased to see in fiction aimed at the under-20 set: Yes, you're weird, unique, maybe even scary to some people, but BE YOURSELF and never stop remaking and remodeling yourself until you get it right! 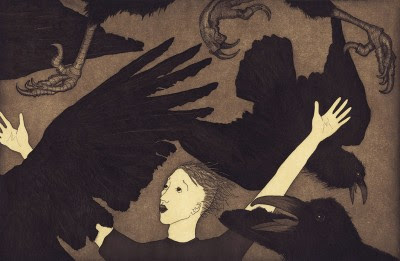 It's a message that I'd like to drum into the heads of my contemporaries, preventing them from doing more damage than is strictly necessary to their grandchildren and the world by holding on to the disproved certainties and the discredited verities that stifle, warp, and kill so very many people even yet.

The book, as an object, is lovely! The paper, a heavy creamy-white matte coated stock, has three edges printed (I suppose) with a metallic, gunmetal-colored ink; it makes the book block shimmer like a raven's wing when the book is closed. The jacket, a grimmish affair of gray stippled fogginess with a silver stamp of Gothic lettering on the front (a choice I don't think works that well), is matte laminated; the case-cover is printed red and black, with a flight of ravens on the front, and the jacket's same poorly chosen Gothic lettering on the spine. Contrasted to the extraordinary edge-printing, it's arrestingly lovely. The printed endsheets are a benday of the jacket's bleccchhhy gloomy gray, a pattern of ravens in motion all over them. It works as endsheets far better than as a jacket.

But the matte-coated paper with Niffenegger's Schiele-influenced people, the designer's wonderfully chosen type, and the generous but not overwhelming amounts of negative space make the reading experience so comfortable, so easy and still so visually stimulating, that the book rises above its simplicity into elegance. I'll be keeping this one because it's such a satisfying marriage of message and medium.