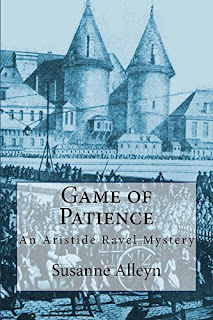 The Publisher Says: Paris, 1796. Aristide Ravel, freelance undercover police agent and investigator, is confronted with a double murder in a fashionable apartment. The victims prove to be Célie Montereau, the daughter of a wealthy and influential family, and the man who was blackmailing her.

Célie's enigmatic and bitter friend Rosalie Clément provides Aristide with intelligence that steers him toward Philippe Aubry, a young man with a violent past who had been in love with Célie. According to an eyewitness, however, Aubry could not have murdered Célie. As time passes, Aristide finds himself falling in love with Rosalie, albeit reluctantly, as he suspects that she knows more about the murders than she will say.

When Aristide uncovers evidence that points to Rosalie herself, he must learn whom she is protecting and why before he can obtain justice for Célie and save Rosalie from the guillotine. From the gritty back alleys of Paris to its glittering salons and cafés, through the heart of the feverish, decadent society of post-revolutionary France, Aristide's investigation leads him into a puzzle involving hidden secrets, crimes of passion, and long-nurtured hatreds.

With elaborate French cultural atmosphere, author Susanne Alleyn has created a sophisticated and stylish mystery set in the uneasy and turbulent years between the Terror and the rise of Napoleon.

My Review: French Revolution buff Alleyn's second novel and first mystery is a perfect example of how historical fiction can illuminate history in the most satisfying and intriguing light; simple textbook history doesn't and can't come close to the concerns and needs of the actual people of 1796 Paris, and this book does that job very, very well.

I could end this review here, adding only "read it yourself if you don't believe me," but I want to offer some specifics.

The upheaval of the Revolution was as inevitable as anything in all of history could be. When intolerable abuse is heaped upon enough people for a long enough time, they find a way to make it stop. While there were Royalists in France, like there were Tories in the American Revolution, they lost...so the history is that of the winners.

But what about the average citizen and citizeness? (These were the titles that replaced Monsieur et Madame in those years.) What did life hold for them? Alleyn explores this subject in her novel, and what life held was...well, what it always holds: Love, hate, fear, passion, joy, rejection, redemption (though that last is rare). So Alleyn delves into our human comedy to show us that, mutatis mutandis, Revolutionary Paris's people were just like us, only colder and hungrier.

The story of Aristide Ravel, police spy, and Henri Sanson, executioner, is one of destinies that criss-cross in unpleasant places. Surprisingly, they find themselves friends...okay, friendly acquaintances at first. As a result of the movements of the plot, their most dramatic meeting will cause the friendship to blossom or die; another book will tell that tale. But theirs is the central relationship in this book. It's an odd thing to say, I suppose, but it's true; they each have one half of a very important story in their possession, neither knowing this until the author clangs them into each other so hard that the reader's teeth rattle.

While Sanson is central to the story, he's offstage most of the time. This device worked well enough, though I was a bit overprepared for his eventual appearances by the time they happened.

The principal quality of this book for me was its rhythm. I felt I was there, living by the truly alien Revolutionary calendar of thirty-day months and ten-day weeks. I found myself thinking "isn't it just about décadi, shouldn't stuff be closed?" (That was the Revolutionary Sunday-day-of-rest equivalent.) I wondered where the manservant was more than once while immersed in Aristide's life...he's too poor to have one. (I relate.) I felt myself jolting along in the fiacre with Aristide and his boss (actually just the frost-heaved Long Island roads) to the Hotel de Ville (my village's city hall is nothing like so grand, but it's next to the liberry so the association stuck).

If you are bored by history, try reading this book. It will allow you to experience history more directly than even a conventional historical novel could, since there are such ordinary human stakes in the crime committed and its solution. If you're a mystery fan, the puzzle should keep you going. IIf you're just an old sourpuss, give it a miss. But I hope you aren't, and hope you'll have a great time walking around Paris with Aristide and his crew.