THE CAVALIER OF THE APOCALYPSE, first Aristide Ravel historical mystery 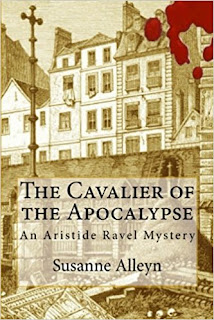 The Publisher Says: In the cold winter of 1786, the streets of Paris are bubbling with discontent, warning of the Revolution to come. When a murdered man is found in a Parisian cemetery, struggling writer Aristide Ravel recognizes the strange symbols surrounding the body to be Masonic.

What secrets are lurking in the city of Paris? In this stunning historical mystery from Susanne Alleyn, Ravel will seek answers in Paris’ intellectual demimonde and discover a world of conspiracy, secret societies and scandal. The third Aristide Ravel mystery, a prequel set in the raucous years leading up to the French Revolution, The Cavalier of the Apocalypse is a fascinating look at a world in turmoil--steeped in atmosphere and peril.

My Review: Wow. In the third published, but first in reading order, of her Aristide Ravel, police spy, mysteries set in Revolutionary Paris, Alleyn actually takes us to 1786, ten years before the first published book (Game of Patience) is set. It is the dying spasm of the ancien regime, the time when the royal government's incompetence and the royal family's political tin ear reached the simultaneous peak of their rise to intolerability. The plot revolves around Aristide's informal induction into the ranks of police informers, and the character Brasseur becomes his mentor in the force.

There is much to like about this book. I am on record elsewhere as admiring Alleyn's ability to set a scene, establish a character, and make a plot revolve like an orrery. This book displays all those characteristics, so...so...why is it I feel just that little bit dissatisfied at the end of it?

Because it's a prequel. Since one of the main reasons I like mysteries is that they're orderly, I like them to appear in order so that I may read them in order. It's the way I want the world to work, this following that which is followed by the other thing. I understand that, sometimes, books in a series appear out of order because publishers make this decision. I don't know if that's the case here, but I gather not since Miss Alleyn is currently writing the fourth book in the series and it's set in 1793.

But really that's a minor point, only of interest to me and my fellow order freaks. The book itself has all the pleasures I've come to associate with Alleyn's writing and I recommend it heartily. Fellow order nuts, read it first!! FIRST!!

This work is licensed under a Creative Commons Attribution-NonCommercial-ShareAlike 3.0 Unported License.
Posted by Richard at 5:30 AM