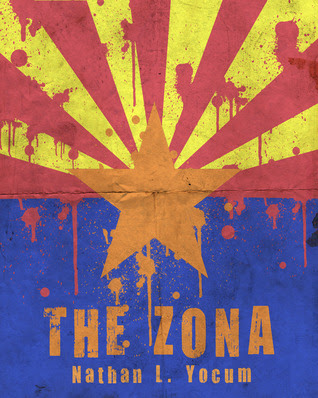 The Publisher Says: The Storms came, and with them disease and blight like mankind had never experienced. Most died, and those who didn't were quick to scramble for weapons, wealth, and control. Petty lords gave way to new societies, and from the ashes of old came the Reformed Arizona Theocracy, or simply put, the Zona. The laws are simple, all sins are punished swiftly and violently. The enforcers, otherwise known as Preachers, roam the lands hunting disgraced men and women. But what happens when Preachers stop killing? What happens when men of honor take a stand against their rulers?

My Review: Lead is a Preacher in the service of the Reformed Theocracy of Arizona...The Zona...which means he seeks out those lost in sin and error and delivers them, either to Purgatory or to Heaven. No trial is needed, no expiation is offered, the Church has decreed them marked (the Mark of Cain) and so Lead (so nicknamed because he was in Lead Group Two during the Battle for Las Vegas, which ended in nuclear conflagration thanks to the Mormons attacking The Zona's foot army and the People's Republic of Northern California's air force, all supposed allies in the cleansing of sin from the face of the earth) may execute his duty with impunity and without stain on his soul.

He shoots them dead on the spot, or he takes them to the foulest prison imaginable, there to die. In God's name let it be done.

You will by now have perceived that this is not the world of 2012. It is a post-Apocalyptic world, one in which The Storms have ended technological civilization, and the survivors of the initial climate apocalypse next faced catastrophic pole shift, then myriad plagues. In the space of about thirty years, humanity's glittering edifice of civilization has utterly vanished. In its place are a few shattered remnants of humankind, struggling to eke out minimum survival and to make some tiny degree of sense out of this tragedy. Up rears the Church, using its time-tested lies and bullshit to harass and hector the shocked walking wounded into a herd, dedicated to the preservation and future wealth of...the Church. Plus ça change, plus c'est la même chose.

So Lead hunts down Preacher Terence, for reasons he doesn't know...he's never told why he's going after a mark, it would only confuse his purpose...and the unthinkable happens. Lead talks to Terence, Lead listens to Terence, and Lead, for the first time since his plague-victim mother dropped dead in the fugee camp and left him to starve or not as best he could, Lead thinks. Why, he thinks., Why, he wonders. Why, he asks, am I killing people to save them? Am I saving them, or damning myself? Is this what God wants of me? Terence, who traveled this road before Lead, answers, “It's what the Church wants, and the Church is not God.”

And there it is, the basis of heresy, and it lights a rocket in Lead's soul that propels the plot into its fast, furious, fiery hot trajectory as Lead and Terence form a little family, attempt to escape the Church and its hideous, hateful strictures, share their horrific pasts (each was, in his own way, part of the Cleansing at Las Vegas, and it left them both irredeemably scarred), and evade their Crusader pursuit team.

The journey to redemption is never easy. It takes its toll on the heartiest and healthiest of men. It leads Lead through the Purgatory he sent other men to, and it sends him, naked and frightened and covered in filth, on a pilgrimage through the desert seeking New Pueblo, a purported Land of Milk and Honey, where the Old Ways still exist.

The first paragraph of the book is what did it for me. I mean, completely hooked me like I was a marlin and it was the goddamned Old Man from that Hemingway farrago.

Lead woke with the sun peeling his eyelids back like the tips of God’s fingers.  His vision shifted to focus on the haze of brown earth and the beige nothing of sand and grit.  His wrists were bound together on the other side of a sandstone boulder, pulled to an excruciating limit, shoulders popped and throbbing.  His beaten face felt like a mask worn off-center, swollen and repugnant.

I like post-Apocalyptic literature, and this novel is some good-quality stuff for my fix. It's a lot like The Road meets A Canticle for Leibowitz to produce a bastard Earth Abides. Author Yocum has a lot to be proud of in this book, and its periodic infelicities of punctuation and occasional lapses into wrong-worditis are readily overlookable because, for heaven's sake, this story is SCARILY PLAUSIBLE. Like “where did this dude get the time machine” plausible. And it's written quite well. And it's paced to maximize excitement. And it's character-development arcs are beautifully calculated to give the minor characters depth and major characters motivation and not bring the bus to a juddering halt during the info-dumps.

Applause, applause, Mr. Yocum, and may you get a mini-series contract from Starz to develop this into a multi-episode successor to The Stand yesterday at the latest. I downloaded the Kindle freebie at about 11am and did not stop reading until I was done. That's how exciting I found this book.

This work is licensed under a Creative Commons Attribution-NonCommercial-ShareAlike 3.0 Unported License.
Posted by Richard at 9:57 AM