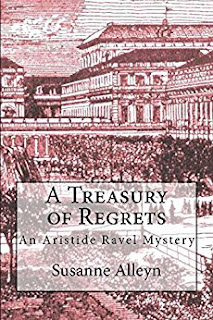 The Publisher Says: For police agent and investigator Aristide Ravel, the teeming streets and alleyways of Paris are a constant source of activity. And in the unruly climate of 1797, when gold and food are scarce, citizens will stop at very little to get what they need.
When Jeannette Moineau, an illiterate servant girl, is accused of poisoning the master of the house where she works, Ravel cannot believe she is guilty of the crime. With stubborn witnesses, a mysterious white powder, and stolen goods all stacked against her, however, he knows it will not be easy to clear her of the charges. But Ravel finds an unexpected ally in Laurence, a young widow of the house, whose past surprisingly intersects with his own.

In a large household brimming with bickering and resentment, everyone seems to have a motive for poisoning old Martin Dupont. But as more family members turn up dead, the list of suspects rapidly dwindles. Tensions rise and Ravel and Laurence must probe the secrets of the city's crafty politicians and confidence artists for clues to clear Jeannette's name. Finding information, though, in dissolute post-revolutionary Paris can lead to costly and dangerous demands.

From the author of Game of Patience comes a new historical mystery, bringing alive the sights and sounds of eighteenth-century Paris---brimming with atmospheric details, scandal, and murder.

My Review: The second published, and fourth in reading order, Aristide Ravel mystery, set in Revolutionary Paris, leads us deeper into the twisty byways of our sleuth's character and, at the same time, deeper into the vanished Paris that was so influential in the creation of the modern world.

I like series mysteries for reasons I've discussed elsewhere...orderly things, mysteries, and the recurring characters make the world feel a little less random than it actually is...but they come with some hazards. Writers under the pressure of deadlines sometimes make us feel as though they're phoning it in, characterization can dwindle to a series of overused tics (like Miss Silver's cough in all those Patricia Wentworth mysteries) or a catchphrase so overused as to make one want to scream blue murder (Hercule Poirot's "little gray cells" oh clam up already).

Alleyn avoids these pitfalls by enriching our understanding of Revolutionary France and its creators as well as our sleuth. This is a spolier, so stop reading if you're spoiler-averse:

Aristide, from the last book, is still mourning his childhood chum Mathieu's death at the hands of the National Convention, which judicially murdered a lot of people belonging to an out-of-power political faction. Aristide dreams of this beloved friend's death at the beginning of this book, and we see him relive the horrible ride to the guillotine that Mathieu took, though I'd think that the presence of a friend there, at that moment, would be a comfort to Mathieu...but the kicker is, as we find out in the course of this murder investigation, that Mathieu was actually In Love with Aristide, who until now was blissfully ignorant of this important fact of his friend's life.

So what does Alleyn do with the major revelation that she gives to not one, but two, of the major characters in this book? Does she grandstand a little and make it a huge stonking Brie wheel of a deal? No. She incorporates the revelations into the actual plot, the real mystery to be solved. It's a very nice touch. It's a reason to keep reading in the series, since this isn't the first time she's done this. It's a marker of a careful, considerate writer, one respectful of her readers, and that kind of writer deserves our dollars.

So, in the end, does this book satisfy? Yes. Are there problems? Yeah...none big...a few scanted red herrings, a little bit of background not quite colored in, that's about all. But history, the living breathing thing history, can never fail to satisfy the discerning reader. Be one of Susanne Alleyn's discerning readers, you won't regret it.