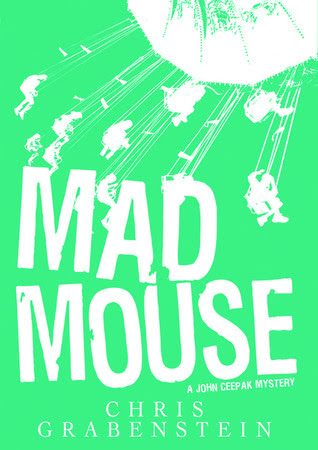 The Publisher Says: It's almost Labor Day, and the end of summer could mean the end of someone's life in this exciting sequel to Chris Grabenstein's Tilt-a-Whirl. Young Danny Boyle, the part-time summer cop "down the shore" in Sea Haven, New Jersey, gets taken on a wild ride when he and his longtime beach buddies become the unwitting targets of a mad-man's twisted scheme for revenge. Fortunately, John Ceepak, the cop with a soldier's unshakeable code of honor, stays at Danny's side to help him negotiate the quick twists and turns that threaten to destroy his life, his friends, and everything about the world he loves. Whipping from the boardwalk to the beach and back again, Mad Mouse keeps zigging and zagging at a breakneck pace, all the way to the surprising finish.

My Review: Second verse, same as the first/Coulda got better....

I enjoyed the time off from the troubling events I'm seeing develop at Goodreads. I hid myself in this enjoyable, light-weight read...

...and *whammo* got the boom lowered on me. Every one of us has done things that, had we known what we were doing at the time, would never have been put into action. Fortunately for most of us, the people we've hurt or mistreated don't come after us with sniper weapons in hand and murder at heart. Danny Boyle, the cool kid from school who never left the town he grew up in, has some of those and here they come with guns and murder all at the ready.

Grabenstein's writing is smooth, very easy on the eyes and ears, and carefully crafted. He chooses the scenes of his story with a very practiced and able eye. He offers an interesting angle of view. But the impact of the story is never in doubt, since his main character is the one in the sniper's crosshairs. Readers of Tilt-A-Whirl are already invested in Danny, and those who start here are probably not that far behind.

In the end, though, after going on the ride with Danny, it's the perp that leaves one almost breathless in horror, pity, fear, loathing. It's all so, so pointless. Except to the unhappy victim. And I don't, this time, mean Danny or his friends.

What worked less well for me was the grafted-on feeling that the romance, which apparently blew up overnight, left me with; the Ceepak presence was deployed in an oddly spotty manner, feeling not exactly perfunctory but less personal than in the first book; and the new character Buzz was, well, here I can say it, perfunctory. Quick strokes, convenient presence, but not integral or maybe integrated, into the action.

A series I will pursue, no doubt, and with pleasure. Just a few clouds in the sunshiney sky. Nothing to suggest even a rain shower, still less a storm. I like finding myself in Sea Haven, and that says a lot.