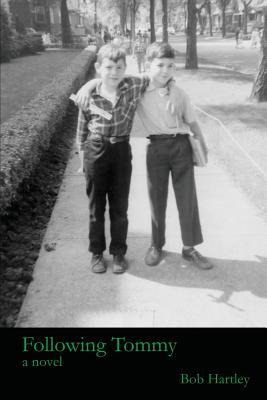 The Publisher Says: Following Tommy tells the story of the O'Days, two young brothers living in an Irish American, working class neighborhood on Chicago’s West Side in the 1960’s. As thieves they are the bane of the neighborhood until the arrival of the first African American family.

My Review: This first novel has the virtue of brevity. The language Hartley deploys in service of his story is a model of concision. The story the author tells is, to my ears, honest and true and quite devastatingly probable. The two O'Day brothers are mildly violent, badly educated petty criminals. The working-class Chicago they inhabit is divided between churchgoers and wise guys, and they are the latter, to their mother's despair. Her early death deprives the boys of nothing in the way of guidance, as they are in their late teens at the time. Her contribution to the story is minimal, so the reader doesn't miss her either. This is probably a function of the shortness of the book.

Perhaps my less-than-ecstatic response comes from my inability to relate to Jacky, our first-person narrator. He's a straight teenaged hooligan whose desire for and discussion of the girls he masturbates while imagining grated on me. It might also be that I internalized more completely than I'd like to examine the class prejudices of my family and regard the "family" of drunks and hooligans that the O'Days represent with lips pressed firmly together so as not to curl them, while dismissing these common-as-pig-tracks people with labels like "white trash" and "bogtrotting shanty Irish bastards."

Whatever the source of my absence of goodwill towards the book, it took me a month to read its 104pp and I was angry the entire time I was reading it. I suspect that Hartley deserves praise for this, because I responded to the characters as real people, and the story as more of a confession than a novel. Jacky and Tommy commit acts of idiot violence, they get caught and suffer at the hands of a casually brutal neighborhood cop (nicknamed "the Giant"), and while I don't like the cop any better than I like any of the other people, I at least felt he had some purpose in his viciousness that I could relate to if not condone.

The evocation of the early-1960s changing world, the one in which African-American people like the O'Days' new neighbors on Menard Street, were at last imagining a better and fairer world was within sight, was painfully spot-on. Hartley gets the sociopath Tommy's response to an African-American family moving into the Irish neighborhood chillingly accurately, at least from the people I've known over the years who had this experience. The fact that I experienced none of it, as I lived in a lily-white world of privilege and watched the race wars on our 26-inch color TV, makes that observation suspect. But Hartley brings me close enough to these yobbos that I can smell their greasy hair and cigarette stink, so I trust that he's got the responses down pat.

Encountering the O'Day brothers, then, wasn't in any particular a homecoming experience. It was an outrage. Jacky's passive, follow-the-leader nature caused me the kind of pain that sucking on an alum stick causes...puckery-lipped, tongue-curling, bad-tasting spitlessness. Tommy, the sociopathic shitheel older brother that Jacky follows, evoked the kind of nauseated disdain that I find myself prone to when confronted with blank-eyed hate-filled people. That Tommy's violent actions, escalated to new heights, lead to the conclusion the novel presents is a grim reality of life lived on those terms. That Jacky makes his decision about what kind of life he wants to lead in terms of Tommy and his actions is sadly believable.

Hear my passionate disdain for the people brought to life here and decide for yourself what kind of reading experience this short novel will be for you. One thing I am quite sure of: You will not be left indifferent. Angry, perhaps. Not indifferent, not bored. That is a lot more than I can say for most books I'm exposed to. If this debut is a reliable indicator of Bob Hartley's intended career path, his writing will earn him a following among the Jim Thompson and Donald Ray Pollock fans.

This work is licensed under a Creative Commons Attribution-NonCommercial-ShareAlike 3.0 Unported License.
Posted by Richard at 12:34 AM