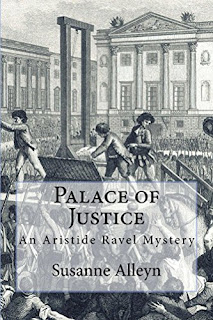 The Publisher Says: Louis XVI is in his grave, and Marie-Antoinette is on her way to trial. Paris is hungry, restless, and fearful in the autumn of 1793, and the guillotine’s blade is beginning to fall daily on the necks of enemies of the French Republic. Not even members of the Republican government are safe from the threat of the Revolutionary Tribunal, where the only sentence for the guilty is death.

In this atmosphere of distrust and anxiety, police agent Ravel, while coming to terms with personal tragedy, must stop a ruthless killer who is terrorizing the city. Ravel soon learns, however, that hunting a murderer who strikes at random and leaves headless corpses on the streets, paralleling the ever more numerous victims of the guillotine, is a task that will lead him to dark, painful secrets and echoes from an even darker past.

From the author of The Cavalier of the Apocalypse, A Treasury of Regrets, and Game of Patience comes the fourth Aristide Ravel mystery, unfolding amid the bloody events and murderous politics of the Reign of Terror.

My Review: Paris during the Terror, 1793, would seem to be a demi-Paradise for a homicide detective. There was a murder or six every few hours at the guillotine. But Aristide Ravel, whose first adventure The Cavalier of the Apocalypse is set in Royalist times and explains why he stopped trying to be a struggling writer and turned to crime (solving!) for his daily bread, is called upon to find the person beheading Paris's lesser folk in icky, non-guillotine-y ways. He does this while watching his dearly beloved friend Mathieu the National Assemblyman walk ever closer to a more judicial murder as a Brissotin. (They lost the power struggle with Robespierre and his ilk.) Ravel finds the suspect, proves he's involved in the grisly freelance murder spree that takes eighteen lives, the murderer confesses, and...and...

There is, quite simply, no excuse for anyone who likes historical novels not to read the Aristide Ravel books. Susanne Alleyn can and will transport you in 21st-century comfort to the fearful, hungry, exciting world of Revolutionary Paris, and you will be deeply glad that it's a book and not a time machine she's using. Though there are many times I would have sworn I really was there, I was so swept up in the action.

Alleyn is unjustly underknown. Please find her books, buy her books, and support the career of a storyteller who has the wit, the sparkle, and the smarts to bring a quietly ignored epoch to gritty, grisly, fascinating life for our amusement and (if we're willing to go there) edification. Highly, highly recommended.

This work is licensed under a Creative Commons Attribution-NonCommercial-ShareAlike 3.0 Unported License.
Posted by Richard at 6:00 AM