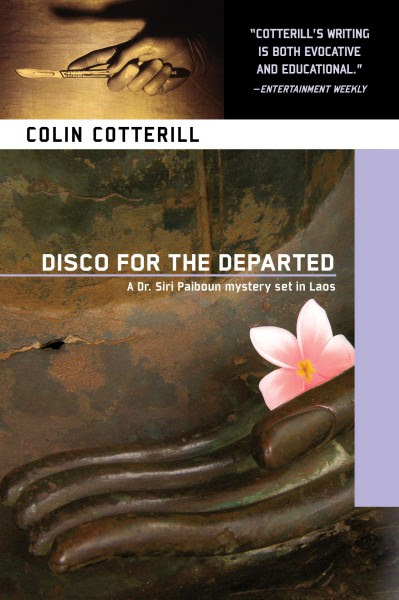 The Publisher Says: Dr. Siri Paiboun, reluctant national coroner of the People’s Democratic Republic of Laos, is summoned to a remote location in the mountains of Huaphan Province, where for years the leaders of the current government had hidden out in caves, waiting to assume power. Now, as a major celebration of the new regime is scheduled to take place, an arm is found protruding from the concrete walk that had been laid from the President’s former cave hideout to his new house beneath the cliffs. Dr. Siri is ordered to supervise the disinterment of the body attached to the arm, identify the corpse and discover how he died.

The autopsy provides some surprises but it is his gift as a shaman that enables the seventy-two-year old doctor to discover why the victim was buried alive and, eventually, the identity of his killer.

My Review: Comrade Doctor Siri, the only coroner in the newly “liberated” Communist regime of Laos, returns to the northeastern jungle caves where he and his Pathet Lao insurgent comrades once fought the Royalists and the Americans for control of Laos. His purpose: Find out, in the ten days before a celebratory concert takes place there, whose body has been discovered in the newly laid cement walkway leading to the president's former hideout. Formidable Nurse Dtui in tow, Dr. Siri uncovers a series of awful, painful truths about families, friends, and the departed but not gone spirits of those who (willingly or not) gave their lives for the cause of communism.

Along the way, Dr. Siri encounters an old Cuban friend from insurgency days, a host of disco-dancing spirits, a Lao cadre with the personality of a rock and the temerity to file a request for permission to woo before approaching Dtui to ask for her hand in marriage, becomes the living host of a different, dead Cuban, and unknowingly loses his eidetically gifted, Down's syndrome afflicted morgue assistant Mr. Geung, who contracts dengue fever (often fatal) in an epic walk across most of Laos to get back from his politically motivated exile from Vientiane's—indeed Laos's—only morgue at the hands of insufferable idiot politico Judge Haeng.

When triumphant Siri and Dtui host an official delegation from Vietnam, their delightful antics offer an ending to this entry in the long-running series that should, if you're at all a fan of the comedy of cosmic justice, have you chortling with appreciative schadenfreude for hours.

In any series, there comes a point when things either get stale or take some sort of turn that's got long-range implications and bends the course of future events. The latter point has been reached in this series, here in the third book, and there are some characters not present who would ordinarily be on-scene. Comrade Inspector Phosy is completely absent; Comrade Minister Civilai is only a token presence; but they will be back. Won't they? I haven't read the next book yet, so I can't be sure, but they should...and Dtui, bless her cotton socks, not only gets a marriage proposal (rejected) but other life-changing news (good) that will make the rest of the series look a little different.

Series mysteries appeal to me for these reasons, these ongoing characters having ongoing lives that change the way things transpire in the books. I am, I suppose, the soap-opera-watching sort of personality. I like getting to know the characters in my entertainments over time, and watching them develop as logically as fictional characters can. Which is often a great deal more logically than corporeal characters can, or at least do, develop. And of course there is the orderliness of bad people being punished for doing bad things aspect of mysteries that's very appealing. It happens so seldom in life.

Cotterill's Laos has the virtue of being completely unfamiliar to me, and therefore adding a (possibly spurious) sense of learning something about an alien life-way. I found the expanded knowledge of Laotian communitarian culture very interesting in this book. The moments that Mr. Geung, walking across most of his country, spends in the care of his countrymen are charming to me, revealing a place and a time that valued humanness and kindness over and above any -ism or credo. Cotterill is at pains to point out that the cities might already be changing, but the populace still valued and followed the ancient principles of hospitality and generosity to others.

A deeply involving series, an interesting entry in it, and a story that both wraps itself up sensibly and satisfyingly as well as sets up the changes and events of the next entry...what more can a mystery addict ask for?