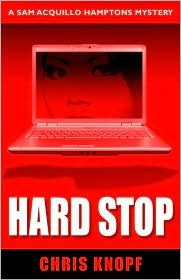 The Publisher Says: In this, the fourth installment in the Sam Acquillo series, Sam's past reaches out to pull him back into the world of big money and even bigger egos, where the term "corporate intrigue" is redundant and ambition the only virtue. It seems a woman vital to the private life of a very important person has gone missing in the Hamptons. And it looks like the best way to get her back is to extort the cooperation of Sam Acquillo. After finally achieving some measure of peace and contentment on Long Island, Sam is yet again an accidental player in other people's dramas. It takes him into the world of private security goons, predatory financiers and lifestyles of young hedonists, some brave, some beautiful, all a bit lost. This time Sam has a few ambitions of his own that lead him into something all his battles in the ring and corporate boardrooms could never have prepared him for.

My Review: Knopf is one reliable writer. His Sam Acquillo is a noir hero with the right stuff, whose world is made up of wastes of space and friends. He doesn't much care which side of The Highway (local Hamptonsese for “the tracks”) you live on, were born on, made it big on...do you pull your own weight? Do you decline to play stupid status games? You got a shot at being on Team Acquillo.

In this outing, Sam's enemies are a smidge more removed from his life, since they come from his past as a major mover and shaker in the world of petrochemical engineering. Sam's whole life has been lived, since the implosion of that career with its house, car, marriage, status, and clothes, in an attempt to be what he always really was: A water rat scraping by, doing the carpentry and fixitry he loves best.

Sam's deep disdain for wealth and for showiness are on full display here. He's a brilliant engineer. He's not, however, greedy. And it works for, against, and through him in this book. The pace is pretty unremitting. The language is, as always, witty and amusing then turning into violent and angry. That's what we pay for, after all, when reading noir novels.

The cop characters are more fully drawn, and that helped; the villain, well, the villain is just a nasty piece of work and no doubt ever obtains as to what or how the crimes that were committed came about. There's a minor twist in the murderer's reveal. But it's this sense that Knopf has another hundred pages of needed backstory to reveal that keeps me rating these books in the middle threes. I love economical storytelling. I like a writer who leaves me some room to think what I want to think. But I also need to make some sort of real connection with the characters, all of them, or I don't see the point of working them into the story. Honest Boy, yes the character's name is Honest Boy, is my prime example here. He shows up with that moniker, which means he's got my attention, and then...piff gone for most of the book. When he shows back up it's not to do anything earth-shattering, either. He's set up for a return engagement, like the local journalist in the last book.

All in all, though, this is a solid book and it's by a solid writer and for noiristas this series is a strong bet. Dog lovers should read them just for Eddie Van Halen. I love that mutt. Go get one. No harm will come to your leisure budget.

This work is licensed under a Creative Commons Attribution-NonCommercial-ShareAlike 3.0 Unported License.
Posted by Richard at 4:15 PM