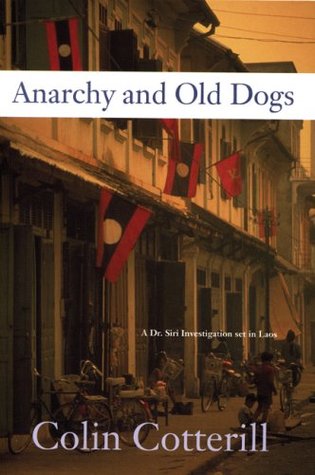 The Publisher Says: A blind retired dentist has been run down by a logging truck on the street in Vientiane just opposite the post office. His body is duly delivered to the morgue of Dr. Siri Paiboun, the official and only coroner of Laos. At the age of seventy-four, Dr. Siri is too old to be in awe of the new communist bureaucrats for whom he now works. He identifies the corpse, helped by the letter in the man’s pocket. But first he must decipher it; it is written in code and invisible ink. The dentist’s widow explains that the enigmatic letters and numbers describe chess moves, but they are unlike any chess symbols Siri has previously encountered. With the help of his old friend, Civilai, now a senior member of the Laos Politburo; Nurse Dtui (“Fatty”); Phosy, a police officer; and Aunt Bpoo, a transvestite fortune-teller, Dr. Siri solves the mystery of the note and foils a plot to overthrow the government of Laos.

My Review: Dr. Siri and his best pal since jungle-fighting revolutionary youth, Comrade Civilai the Politburo senior cadre and all-around curmudgeon, uncover a major problem in the course of an investigation into the death of an old blind dentist whose habit of coming by bus to Vientiane, the capital, to pick up a letter written in invisible ink every week is interrupted by a runaway logging truck. The widow, far from grieving, is damn near slobbering to get the letter away from Siri. This makes him wonder....

So Siri, Civilai, Nurse Dtui, and Comrade Policeman Phosy (Mr. Geung, the Down-syndrome-having morgue assistant, is still recovering from dengue fever from last book) are set on a collision course with modern Laos's first attempted counter-coup by Royalists based across the Mekong River in Thailand. Siri also solves the murder of a small boy, a troublemaking 1970s version of Siri himself I suspect, is betrayed, finds a long-lost revolutionary-era gal-pal of his and his wife's, is betrayed again, and suffers the pangs of later-life love. In the end, of course, the murder of the dentist, the murder of the small boy, and the pair of betrayals are interconnected by Cotterill's undeniable panache in plotting. And, well, love is in the August, 1977, air....

...but none of it is comin' from me. Anyone who has read my outraged screech of a review of The Brutal Telling by Lousy Louise Penny will remember how bitterly I responded to her ripping out my heart and shredding it into gobbets, then pouring boiling salted vinegar into the still-living cavity she left, with the character development that ends the book. I rated it -15,000*. I give Crummy Colin Cotterill 25 more stars because the ripping, shredding, and pouring were very slightly ameliorated by the in-book resolution to the main betrayal, and the sheer rightness of the second betrayal that ends so happily, and by the whimsical pleasure of the love affair for Dr. Siri.

Plus there's Auntie Bpoo, the transvestite shaman who works the riverside in front of the Aeroflot office, of whom I devoutly hope to see more.

This work is licensed under a Creative Commons Attribution-NonCommercial-ShareAlike 3.0 Unported License.
Posted by Richard at 8:30 AM