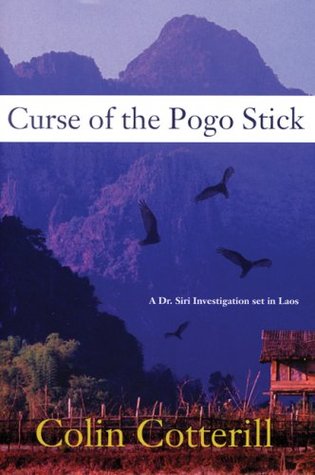 The Publisher Says: In Vientiane, a booby-trapped corpse, intended for Dr. Siri, the national coroner of Laos, has been delivered to the morgue. In his absence, only Nurse Dtui’s intervention saves the lives of the morgue attendants, visiting doctors, and Madame Daeng, Dr. Siri’s fiancée.

On his way back from a communist party meeting in the north, Dr. Siri is kidnapped by seven female Hmong villagers under the direction of the village elder so that he will—in the guise of Yeh Ming, the thousand-year-old shaman with whom he shares his body—exorcise the headman’s daughter whose soul is possessed by a demon, and lift the curse of the pogo stick.


My Review: Dr. Siri Paiboun is my role model for growing older. I want to be as cantankerous and unafraid as he is, and as forgiving and tolerant as he is, and marry someone I'm in love with like he does.

Who am I kidding? I'd like any of those things NOW, except the marriage thing, which no thank you, I remember that too well.

So this is the fifth book in the series, and the action takes place late in 1977 into 1978. Siri's seventy-three. The reason I'm reviewing a book so late in the series is simple: I want to tell everyone that, contrary to established custom, the series isn't sagging, and the sleuthing isn't drooping. Siri's believability is quite as firm as it was, meaning if you didn't buy in from the get-go, you won't be in now either. I love our secondary characters quite a lot, and am invested in the world of Dtui and Phosy and Geung as much as Siri and Daeng and Civilai. It's just too much fun to perch on the back of the lilac police Vespa, pull my scarf over my nose and mouth, and whip along the trafficless roads around Vientiane to chase malefactors!

Now that's one helluva mental picture, isn't it? But in this book, in this series, your fat old stiff-jointed American correspondent here can do exactly that. AND solve a crime. (Sort of, there really isn't a mystery-novel crime to solve in this book...so what, though?) I get to travel to the Hmong Otherworld! I am invited to an illegal Buddhist wedding! And through it all, my green-eyed hobbit-sized impish cicerone, Dr. Siri, sees how true and marvelous the world is, how little in it matters except being present and available and kind.

Rightness. Completing one's journey and, thereby, completing the journeys of others. I hope all of us are able to say, looking at our last dawn, that we did that very thing, at least once.

This work is licensed under a Creative Commons Attribution-NonCommercial-ShareAlike 3.0 Unported License.
Posted by Richard at 9:00 AM