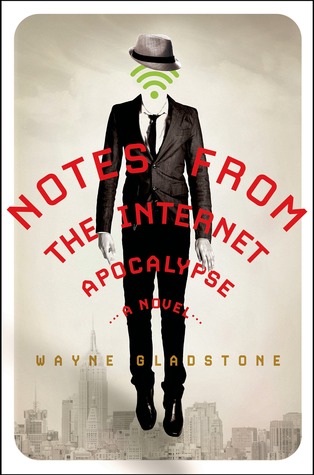 The Publisher Says:When the Internet suddenly stops working, society reels from the loss of flowing data, instant messages, and streaming entertainment. Addicts wander the streets, talking to themselves in 140 characters or forcing cats to perform tricks for their amusement, while the truly desperate pin their requests for casual encounters on public bulletin boards. The economy tumbles further and the government passes the draconian NET Recovery Act.

For Gladstone, the Net's disappearance comes particularly hard following the loss of his wife, leaving his flask of Jamesons and grandfather’s fedora as the only comforts in his Brooklyn apartment. But there are rumors that someone in New York is still online. Someone set apart from this new world where Facebook flirters "poke" each other in real life and members of Anonymous trade memes at secret parties. Where a former librarian can sell information as a human search engine, and the perverted fulfill their secret fetishes at the blossoming Rule 34 club. With the help of his friends, a blogger and a webcam girl both now out of work, Gladstone sets off to find the Internet. But is he the right man to save humanity from this Apocalypse?

For fans of David Wong, Chad Kultgen, and Chuck Palahniuk, Wayne Gladstone’s Notes from the Internet Apocalypse examines the question “What is life without the Web?”

My Review: When I was a teen, something Amazing happened to me and my generation. My drama-fag friends and I, at various peoples' houses, spent every Saturday night watching The Funniest Show Ever Made: Saturday Night Live!! Brand new, unprecedented, unlike anything else ever!!!!!!!! (Remember we were adolescents. Caps and exclams and complete lack of perspective were then, as they are now, de rigueur.)

One Saturday night, I couldn't go to whoever's house to watch that week's episode for some reason. I made my mother, at the time 55, watch it with me by promising it would be Hilarious, Momentous, Life-Changing!!!! She, faithless to the dour brand of nutsoid Protestant Puritanism she'd taken to supporting, agreed and watched the whole thing.

I howled! I clapped! I bopped along with the musical guest and Supergenius G.E. Smith! And, as the credits ran, I turned to Mama and demanded, "wasn't that the funniest thing ever?!" She smiled at me and delivered the most withering possible response: "It was indeed! Imogene Coca and Sid Caesar were hilarious in the first sketch, and Jack Benny and Rochester were perfect in that second one."

That is precisely how I feel now: This book was right funny indeed, back when Peter de Vries did the social satire in 1965, and Thorne Smith did the smutty bits in 1935. And damn me if I didn't see Trudeau's Zonker Harris from 1975 somewhere in there.

There is nothing new under the sun, chick-a-biddies, and when enough sunrises have awakened one, there's a distinct lack of surprise in shock humor and topical tropism. Those over 40 are strongly discouraged from reading this book; those over 30 reminded to expect smiles not guffaws.