DEEP TISSUE, stories that work you over 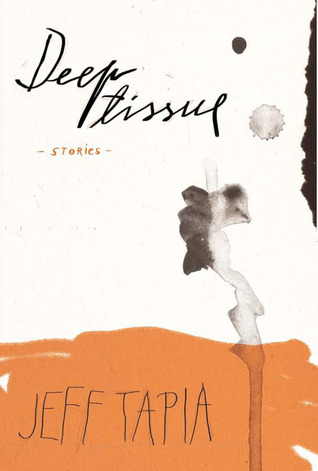 The Publisher Says: Jeff Tapia’s collection Deep Tissue is written in a preposterously excruciating style that mimics the often preposterous and excruciating everydayness of modern life. In the title story, a man seeks revenge against his soon-to-be ex-wife by destroying her new kitchen appliance. In “Fear’s,” a disgruntled security guard asks his good-natured buddy to help him cut off his foot. The middle-aged woman in “The Dark Continent” keeps the lump in her breast a secret from her new partner only to discover – belatedly – that he has a secret of his own. Mimicking the soulless rummage of the information age, Deep Tissue explores the poignant needs and desires of everyday people engulfed in a phony world.

My Review: My favorite of these stories is "Horns Overflowing." In light of the recent Steubenville rape-story idiocy, the story of a married couple's Thanksgiving meal with the shade of their imprisoned son had an even greater impact on me than it might have otherwise.

Walter tells Rex not to worry about it. He says he really wants to come in. He says he can tell his wife wants to talk about their son again. Walter asks Rex if he ever told him he even had a son. Rex answers. Walter asks him if he remembers the story about the frat-house rape. Joan gets a sick look on her face. Walter tells Rex it was in all the papers. Joan gets up from the table. Her chair tips back against the buffet, and her napkin falls to the floor. Joan does not pick it up. Joan leaves the room. She goes into the kitchen. The kitchen has both a pantry and a closet. Joan keeps things like the vacuum and the ironing board in the closet. Joan really wants a new bagless vacuum.

I read the collection slowly because there is only one style the author is working in, and you're looking at it. I like it. I don't, however, want to read all twelve stories in a gulp because comma-phobic sentence building isn't restful reading for me.

I'd say the author's strength is also his weak point, in that his style is so very integral to the stories being told. Everyday sentences adding up to quotidian revelations of petty emotional crimes. And the effect of all of them together is less than the pleasure of each considered in its own space.

Pick this book up, the Kindle edition's only $8, and read it story by story between longer books. These stories are very good, this writer has a voice (how rare that is!), and we should be happy to support him so we can see what he does next.

***Livingston Press gave me an ARC at my request.***

This work is licensed under a Creative Commons Attribution-NonCommercial-ShareAlike 3.0 Unported License.
Posted by Richard at 2:07 PM