CARDS ON THE TABLE, a delightful psychological mystery book and film 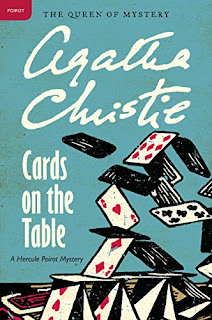 The Publisher Says: It was the match-up of the century: four sleuths--Superintendent Battle of Scotland Yard; Mrs. Ariadne Oliver, famed writer of detective stories; Col. Race of His Majesty's Secret Service; and the incomparable Hercule Poirot - invited to play bridge with four specially invited guests, each of whom had gotten away with murder! But before the first rubber was completed, the host was dead.

My Review: This review is of Christie's novel and the tenth-season film adaptation for Agatha Christie's Poirot. They earn the same rating.

One of the ways couples reinforce their pair bond is shared entertainment. My Gentleman Caller and I read a lot; I'm a big mystery fan, where he is less interested in the genre. We both enjoy mystery movies a good deal, though, and the Poirot series especially. Through the amazing and wonderful Internet, we can watch episodes together, discussing them in real time, or just canoodling in cyberspace. I think I'd go bonkers if I didn't have my fix of looking at his face this way.

So this evening we watched two of the movies. First up was this very entertaining adaptation of Christie's novel of psychology. Ariadne Oliver, an author surrogate character for Mrs. Christie herself, makes her first filmed and literary appearance here. Zoë Wanamaker is a wonderful choice to play Mrs. Oliver, being husky-voiced and of a distinctive and memorable appearance. It's one of the pleasures of the films that the actors cast in Christie's roles are uniformly excellent craftspeople, and Wanamaker is no exception.

In watching this adaptation, I felt a wee bit seasick. All the roles were there, just as in the book; but they had different names, unrecognizable motives, and switched-up personae. Colonel Race, a recurring Christie character, is called something else although it's only his name that's different. Rhoda and Anne completely switch purposes, though I have no earthly notion why. The motivation for the central murder is *completely* unrecognizable. It would, in fact, have been impossible for Christie to write it in 1935 and get the book published. The Superintendent is renamed and good gracious me how he is changed up! I mean to tell you, Ma Christie would likely be apoplectic over this particular bit of modification.

The victim, Mr. Shaitana, is portrayed by Alexander Siddig, who enacted the role of Doctor Bashir on Star Trek: Deep Space Nine about twenty years ago. I hadn't recalled that the man was so very tall and so very lean. As Shaitana, a furriner and an ethnic in racist 1930s London, he (Siddig) is perfectly chosen: He looks exotic and strange, skin of brown and eyes of green and wardrobe chosen to exaggerate the actor's dramatic silhouette. Mrs. Oliver as a stand-in for Christie herself comments on his foreignness by saying he "gives {her} the jitters." Really. Yech.

The mundane murder motive in the novel is considerably spicier in the film, and actually more fun for this modern audience of two. The book presents a more complete Christieverse experience, drawing the four sleuths and one suspect from the well she reused freely. Each decision has its advantages; on the whole, I can't say that one of the media is preferable to the other. I, and certainly my Gentleman Caller, don't subscribe to the Purity Test for films. The source material will always be altered to suit the demands of the medium. That's the way it works, and more often than not has to; not infrequently the adapted film is superior to the source material, if rabid ardent nut-level fans would simply see it. (And of course there are reverse cases by the scores, it's not a one-way street by any means.)

This film, substantially altered from an excellent novel, finds a different and equal excellence. The spirit of the story is intact, and is well served by the changes made for film. And as always, the role of Poirot is complete and entire in David Suchet's hands. And mincing feet. And waxed mustache. The story, either medium, is delicious and savory and a treat not to be denied oneself.

This work is licensed under a Creative Commons Attribution-NonCommercial-ShareAlike 3.0 Unported License.
Posted by Richard at 6:00 AM