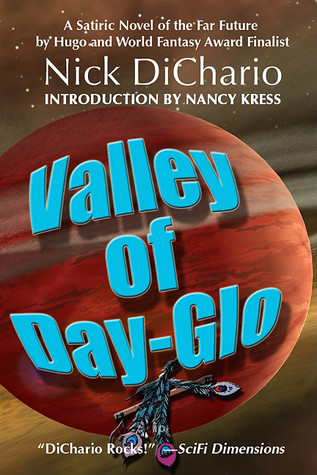 The Publisher Says: "Broadway Danny Rose is on the move!"

In this brightly satiric, postapocalyptic novel of the far future, a young Indian brave named Broadway Danny Rose embarks upon a quest across the desolate planet Earth to find the mysterious Valley of Day-Glo, where plants and animals and large bodies of water are rumoured to still exist, and where, according to legend, "death becomes life."

Valley of Day-Glo is a brilliant blend of Douglas Adams' farcical humour and Kurt Vonnegut's droll absurdity. Hugo Award-nominee Nick DiChario delivers a witty and poignant story that deals with the power of myth, the search for truth, and the meaning of life and death.

My Review: The UK Book-A-Day meme, a book a day for August 2014, is the goad I'm using to get through my snit-based unwritten SF-book reviews. Today's prompt, the first one of August, recalls to mind a book with a memorable first line.


The day Mother Who's Afraid of Virginia Woolf? killed Father The Outlaw Josey Wales, they were arguing again about the Pre-Reddening game of Major League Baseball.

Baseball, post-apocalyptic future, and the kind of names I associate with A Canticle for Leibowitz...okay, I'm in.

And that was the last thing I really grokked for the next 210pp. The Bibles of the various Indian (the word used in the book, leave me alone about it) tribes are all random survivors of the pre-Apocalyptic Honio'o (white) culture. They are some dillies, including a network marketing self-help text and a book of baseball statistics and records.


The woman tried her best to entice me, calling me 'dear, sweet boy,' stroking and pumping me as if I were a bleating animal from which she hoped to produce milk. Father turned into a cheerleader when he saw things weren't going well, clapping his hands, patting my back, pushing me on top of the old harlot again and again, as if I might discover some buried treasure deep within the gaping, malodorous hollow between her legs.

And that, laddies and gentlewomen, is the end of this particular road.

As Broadway Danny Rose journeys Candide-like through the landscape of a world brutally and completely destroyed by the Honio'o, he meets several different tribes and nearly succumbs to several different fates, but in the end he fetches up in the Valley of Day-Glo, where death becomes life, and where Mother Who's Afraid of Virginia Woolf? intended to take the murdered carcass of Father The Outlaw Josey Wales so that the tribe might continue to eke an existence out of the way of the great and powerful Seneca people.

Once in the place where death becomes life, Broadway Danny Rose is met by the Cuisinart Coffeepot that rules the Valley of Day-Glo. (Believe me when I tell you that by the time this eventuates, you won't care that it makes little to no sense.) After a discussion with Father The Outlaw Josey Wales in which the naked intersex Broadway Danny Rose learns nothing new, the book ends.

I'm not actually being over-generous with my stars here. There are moments of weirdness that make one impatient, and then there are phrases like this:


I could feel a headache circling in on me with the long, careful, merciless descent of a carrion bird.

I liked the verve and the manic energy of the book. I appreciated that the author and publisher kept it short. I enjoyed the sharpness of the satire, and the mischievous survival of so much bad-book publishing.

But I am not going to warble a paean of praise for it, exhorting all who come into range to buy and consume the story. Most non-SF readers would simply not enjoy the read at all. Bizarro readers will feel it's tame. The Longface Puritans' League will whinny about how pointless and amusing the book is, these being their cardinal sins for writing. (WHAT?! Someone might ENJOY it?! BURN IT NOW!!)

So why should you read it? Cat fur to make kitten britches, as Mama used to say. Read it because it's there, or don't read it at all, or pick it up at a garage sale with a vague memory of an old review...you never know.