SAVING THE HOOKER, a lot funnier than the films it satirizes! 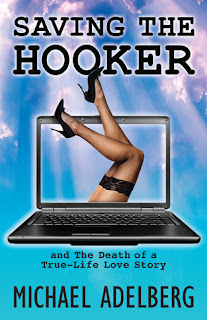 The Publisher Says: Matthew Hristahalois (Hrist-a-hal-E-os) is a not so scholarly scholar. He's obsessed with the "Hooker with a Heart of Gold" character that keeps turning up in movies like Pretty Woman and The Hangover—the beautiful and kind fallen woman who can only be saved by Prince Charming. Matthew wins a post-doc to see if real fallen women can be saved by a good man. He casts himself as Prince Charming and sets out to study and rehabilitate real New York City prostitutes, at least until he meets a fiery auburn-haired prostitute who calls herself Julia Roberts.

Saving the Hooker is a fast-paced assault on male hubris and the recycled fairy tales at the core of so many of our favorite books and movies. It is also a bawdy tour of lower Manhattan's escort service prostitution scene, a poke in the eye of academic orthodoxy, and a not-so-subtle send up of cable television talk-news. Centered on the combustible relationship between Matthew and Julia, Saving the Hooker makes comic hash out of modern America's show horse institutions and sacred cow issues: academia, high and low media, political correctness, misogyny, and sexual assault.

My Review: I don't at all enjoy the way women are portrayed in major-budget films. They're scheming scum, out to hurt every man they meet, or they're saintly supporters, human jock straps meant to keep Their Man's balls in the air no matter how hard gravity pulls on 'em. Thus there are mothers and wives, there are sex workers and assistants; there are not rivals and partners.

This sends the message that women exist for men, and have no valid existence aside from their relations with men. That being arrant nonsense, I long ago stopped enjoying any film that doesn't pass the Bechdel Test, and there are precious few of them. As the years pass, and as I grow to realize how few women actually think about men all that much, I realize that someone like Michael Adelberg is on to something. He's also almost alone in talking about it. I hope he's not as alone in thinking about it.

Sadly I suspect that he is.


I lied to my father about having a real girlfriend: I conned my old friends into thinking I was a dude with fun friends; and I pulled this off by financing sexual favors, including the loss of my own virginity, with the center’s research funds.

What makes the story of Matthew's search for the roots of the "Hooker with a Heart of Gold" tale as funny as it is, is the pace the author sustains. Humor needs speed. Slow, ponderous things aren't usually funny, or at least not intentionally. Here we're careening all around Manhattan as Matthew bounces off the pachinko bumpers of misogyny (presented humorously but not played for laughs) and its stablemate political correctness...condescending mealy-mouthed nonsense with a genuinely important impetus, to stop cruel and belittling stereotyping...thus ramming at speed into clueless men and resigned, angrily despairing women.


For four nights, I imagined introducing myself to Ms. Caliente and telling her that I was a researcher. I imagined buying her a cup of coffee and talking with her about Mexico and how she fell into hooking. I imagined her telling me that I was the first truly nice man she’d ever known.

Matthew's Pilgrim's Progress is speeded up by the connections his academic focus makes a variety of stake-holders take an interest in his purpose. The "Wolf News Channel" episode made me laugh very scornfully, I admit. But the problem, as any grown-up knows, is that this lifestyle is expensive and deep pockets aren't common in academia...or not for very long, anyway. And worst of all, when he snags a perfect research subject he discovers that he's what he always was: A means to someone else's end.

This is a funny, bitter, cynical read that has big ambitions and only just falls short of realizing them fully. While Matthew's research is on the right track, he's still just a guy without a clue when it comes to women. He doesn't see, and doesn't see that he doesn't see, the hard truth that he comes across as the kid who fell off the pickle truck as it made a hard left onto Tenth Avenue. When life makes it too obvious for him to ignore, he responds in the stereotypical man way.

I trust all my readers will remember why The Pilgrim's Progress came to be. Now apply that here. And there you have the missing stars! Not everyone will feel as I do, so by all means adventure a bit and pick one up.

I got so much of what I wanted that I'm really annoyed I didn't get it all.