Book-A-Day meme #9, a character you love to hate: DELTA WEDDING 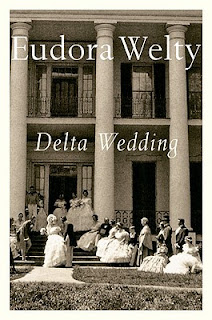 The Publisher Says: A vivid and charming portrait of a large southern family, the Fairchilds, who live on a plantation in the Mississippi delta. The story, set in 1923, is exquisitely woven from the ordinary events of family life, centered around the visit of a young relative, Laura McRaven, and the family’s preparations for her cousin Dabney’s wedding.

My Review: The Doubleday UK meme, a book a day for July 2014, is the goad I'm using to get through my snit-based unwritten reviews. Today's prompt, the ninth, is to discuss your favorite character in a novel to hate.

Dabney. Hands down, Dabney. What a self-centered nightmare of a spoiled brat! She's marryin' 'neath her, that no-count Troy is just scramblin' for a place in the Fairchilds! But Dabney, she knows:

And still, there's something deeply Southern in Dabney's greed, something that life in the lush heat of the land down by the water just puts in you, makes you part of it:


The eagerness with which she was now going to Marmion, entering her real life there with Troy, told her enough - all the cotton in the world was not worth one moment of life! It made her know that nothing could ever defy her enough to make her leave it. How sweet life was, and how well she could hold it, pluck it, eat it, lay her cheek to it - oh, no one else knew. The juice of life and the hot, delighting taste and the fragrance and warmth to the cheek, the mouth....

Dabney's complete inability to see the other person as real makes her a monster, that familiar monster, The Southern Belle. She hasn't got room for anyone but herself in the movie of her life:


Life was not ever inviolate. Dabney, poor sister and bride, shed tears this morning (though belatedly) because she had broken the Fairchild night light the aunts had given her; it seemed so unavoidable to Dabney, that was why she cried, as if she had felt it was part of her being married that this cherished little bit of other peoples' lives should be shattered now.

Things, the stuff that surrounds people like the Fairchilds from cradle to grave (and they'd take it on as grave goods if only people still did that), *those* evoke tears and memories. Not the people, not the little damn-near stranger in the Fairchild midst, little motherless Laura whose presence is unwished for but accepted because she is Family.

And in the end, that's where we end up in this novel, in the Family. Like every family, the Fairchilds have codes and shortcuts in their communication that seem designed to exclude others. That includes the reader of the novel, in fact. But it's not that the Fairchilds don't want you to understand them, or that Miss Eudora failed to give you the keys to a roman à clef. It's this very experience that's the point of the novel. Either you like that experience, or you don't, but this is the point:


Indeed the Fairchilds took you in circles, whirling delightedly about, she thought, stirring up confusions, hopefully working themselves up. But they did not really want anything they got - and nothing, really, nothing really so very much, happened!

Now that said, what makes this book fall short of four stars for me, an ardent Eudoraist? Novels aren't like short stories in that the introduction of a character or inclusion of a detail must be part of the essential nature of the book. There are about a squillion voices in this chorus, and that's just way too many. WAY too many. So there isn't a long-term investment in the current carrying us to...to...wherever it is we're going and we don't quite get to. Miss Eudora could've pruned the voices to Dabney, Uncle George, and Laura, and been able to tell the same big, noisy story. But this is a novel, and writing novels was not Miss Eudora's métier. That was the short story, a form of which she was a mistress.

In the end, as much as I loved to hate Dabney and her cut-rate Scarlett-ness, I was only slightly less appalled by the sheer feckless ridiculousness of George, Dabney's uncle and the Fairchild Golden Boy, and the cult surrounding him. His morganatic marriage to Robbie is summed up by Aunt Ellen, one of his groupies:


t seemed to Ellen at moments that George regarded them, and regarded things - just things, in the outside world - with a passion which held him so still that it resembled indifference. Perhaps it was indifference - as though they, having given him this astonishing feeling, might for a time float away and he not care. It was not love or passion itself that stirred him, necessarily, she felt - for instance, Dabney's marriage seemed not to have affected him greatly, or Robbie's anguish. But little Ranny, a flower, a horse running, a color, a terrible story listened to in the store in Fairchilds, or a common song, and yes, shock, physical danger, as Robbie had discovered, roused something in him that was immense contemplation, motionless pity, indifference...Then, he would come forward all smiles as if in greeting - come out of his intensity and give some child a spank or a present. Ellen had always felt this about George and now there was something of surprising kinship in the feeling.

That gets to the heart of my dislike and discomfort with George. He's so spoiled, so cossetted and babied, that only a severe adrenaline jolt (at someone else's expense) will do to fetch him up among the living.

It's not hard for me to appreciate this novel for what it is, but it's not at all the beau ideal of a novelist's art. I like it, I understand why others don't, but goodness me give me the lush, rich, deeply felt beauty of Welty's prose any old way it comes.