Book A Day #7: A Chocolatey Book, ALL THE PRETTY HORSES 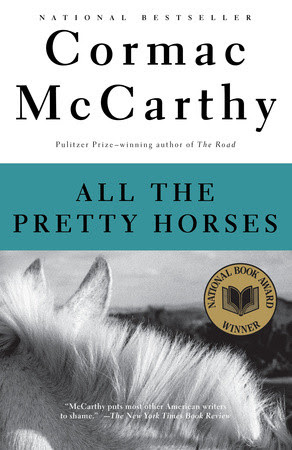 The Publisher Says: The national bestseller and the first volume in Cormac McCarthy's Border Trilogy, All the Pretty Horses is the tale of John Grady Cole, who at sixteen finds himself at the end of a long line of Texas ranchers, cut off from the only life he has ever imagined for himself. With two companions, he sets off for Mexico on a sometimes idyllic, sometimes comic journey to a place where dreams are paid for in blood. Winner of the National Book Award for Fiction.

My Review: The Doubleday UK meme, a book a day for July 2014, is the goad I'm using to get through my snit-based unwritten reviews. Today's prompt is to discuss the "most chocolatey novel" for National Chocolate Day.

I hate chocolate, and I hated this pretentious self-conscious poseur of a novel.

Which is not to say that McCarthy can't write very nice lines:
Between the wish and the thing the world lies waiting.
--lovely and precise

Scars have the strange power to remind us that our past is real.
--amen to that one

But that isn't enough to make a book a Modern Classic! A triumph! A brilliant (overused word) novel!

It's a very basic coming-of-age-in-the-West story featuring a blah little boy who becomes a Man because shit happens. Where it isn't tedious it's nauseous. The pornographically sensual descriptions of guns and blood and cruelty are, for this reader at least, off-putting.

Take away the "difficult" "innovative" (really? eighty years after Ulysses and we're calling this crap-fest difficult and innovative?) stylistic quirks and what do you have?

How horrible is that.

This work is licensed under a Creative Commons Attribution-NonCommercial-ShareAlike 3.0 Unported License.
Posted by Richard at 12:02 PM